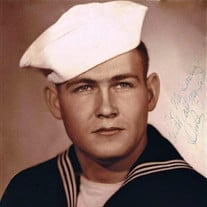 William Lance Holt, 89, of Savannah, GA passed away November 26, 2020 at home. He was born to the late Willie Edmond Holt and Elma Sparrow Holt on July 29, 1931 in Vienna, Georgia. He served in the Army National Guard (1948-1951), the United States Navy (1951-1955), the United States Naval Reserve (1957-1961), and the US Coast Guard Reserve (1961-1967). While in the US Navy he served on the USS Competent AM316 in Korea and later the USS Detector MSO-429 (a 180-foot wooden minesweeper ship). During his years of military service, he earned several military awards. Most recently he received from the Republic of South Korea, the Korean Ambassador for Peace Medal. While in Brunswick, Georgia he met the first love of his life, Connie June Brown, and the two were married in 1952. After Connie’s passing in 1990, he was blessed to later meet a second love, Vivian Smith. They were married in 2003. When not on active duty military service, he worked for Diamond Construction Company, Goodyear Tire and the United States Postal Service. He retired from the US Postal Service in 1987 after 30 years of service. William (often known as Dub and while a Postal Carrier as Talk-Talk) was always making others laugh with his good humor and funny jokes. After he retired from the US Postal Service, Dub spent his time reading the newspaper and many political and legal publications. He loved President Trump and would often say, “Better save your money” or “I woke up this morning and thought I was going crazy. I dreamed I had to go to work”. He was always willing to help others. After retirement, he worked with a friend in the fencing business to help him grow that business. He taught classes at Savannah Technical, always wanting to help others learn more. He also enjoyed making the best barbecue you could find and his BBQ Sauce is loved by friends and the whole family to this day. Dub really enjoyed it when family would visit. He loved his children, grandchildren, and especially the great grandchildren that followed. He was a true friend to so many and always had a way to make any stranger smile. He was never shy to voice his opinion while remaining one of a kind. He will be terribly missed. He is preceded in death by both of his parents, Willie Edmond Holt and Elma Sparrow Holt, as well as his first wife, Connie June Holt. Surviving are his wife, Vivian Smith Holt; a son, Charles (Chuck) William Holt (Joy); a daughter, Debra (Debbie) Ann Eubanks (Frank); seven grandchildren, Shannon Marie Peterson, Jonathan Lance Holt, Brandy Danielle (Eubanks) Sullivan, Amanda Joy (Holt) Fraser, Frank David Eubanks II, Kayli Nicole Smith, and Ethan Thomas Smith; and nine great grandchildren. The family will receive friends from 10:00 a.m. - 11:00 a.m. Saturday, December 5, 2020 at Baker McCullough Funeral Home, 7415 Hodgson Memorial Drive, Savannah, GA with services in the Chapel beginning at 11:00 a.m. The service will be available to live stream using the link found on this page at 1045am Saturday using the following link. Graveside Services with military honors will be held following the Chapel service at Forest Lawn Memory Gardens Cemetery.

The family of William Lance Holt created this Life Tributes page to make it easy to share your memories.

Send flowers to the Holt family.