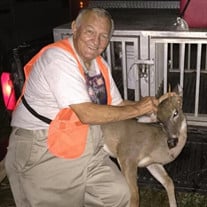 William Henry Connelly, Jr., 87, of Kingsland, Ga. passed away January 15, 2021. He was born December 16, 1933 in Allendale, South Carolina. to the late Minnie (Davis) and William Connelly, Sr. He was a printer, having been employed with... View Obituary & Service Information

The family of William Henry Connelly Jr. created this Life Tributes page to make it easy to share your memories.

Send flowers to the Connelly family.