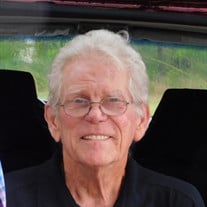 William “Sweet William” Anderson, age 78 of Savannah passed away September 10th at his nieces’ home under the care of Hospice of Savannah. Willie was born in Atlanta, GA to Annie Mae Sumner and Joseph Franklin Anderson. He was very proud that he went to Richard Arnold to earn his GED at the tender age of 50. He served as a Lance Corporal in the United States Marine Corp. He was an ordained deacon in his church. Bill, by all that knew him in his occupation as a fantastic painter. He said he sprinkled paint on his whites to make it look like he was working. Amazing painter but that is where the buck stops. Once he couldn’t understand why his vehicle wouldn’t start because after all “it had water in the radiator!” He enjoyed reading, word puzzles, and eating. His favorites included a steak and a baked potato as big as his head. He always wanted chicken and broccoli Alfredo for his birthday dinner. Never ate dessert because he didn’t need the sugar but drank the equivalent of a bucket of coke a day. LOVED yelling at the television to cheer on his Bull Dawgs and Falcons. He loved telling stories, one of which is when he won tickets to an Olympic baseball game in 1996 at the Atlanta Games. He got a kick walking around his old neighborhood. “I’m thoughtful, kind, considerate, and all around good egg. I’m one of the good guys. I wear a white hat you know.” We must have heard him say that phrase a million times. It was his motto. Anyone that knew him would say he would argue with a post, but he always had a smile on his face a kept positive attitude. His response to being told I love you was “Well what’s not to love?!!” He was right what’s not to love. He is survived in death by his two sisters, Joanne Echols of Tennessee and Linda “Lula Bell” Wilson. Three brothers preceded him in death, Harley Gober of Savannah, Charlie Gober of Savannah, Bobby Gober of Savannah, and Carl Anderson of Savannah. He also left many nieces, nephews, great nieces and great nephews. Service will be private. Please sign our online guestbook at www.bakermccullough.com Services have been entrusted to Baker McCullough Funeral Home Garden City Chapel, 2794 West US Highway 80 Garden City, GA 31408. (912) 964-2862. www.bakermccullough.com

William &#8220;Sweet William&#8221; Anderson, age 78 of Savannah passed away September 10th at his nieces&#8217; home under the care of Hospice of Savannah. Willie was born in Atlanta, GA to Annie Mae Sumner and Joseph Franklin Anderson. He... View Obituary & Service Information

The family of William T. Anderson created this Life Tributes page to make it easy to share your memories.

Send flowers to the Anderson family.