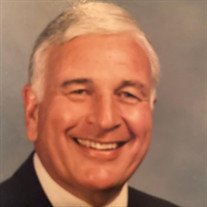 Vincent Jean Carillot Savannah, GA March 25, 1927-December 24, 2020 (93 years old) Devoted and loving husband for 46 years to Lucy (nee Griffin) and father of eight daughters (via blended family); Della Sullivan (Tom), Kim Kaucher, Chris Vanbourgondien (Tom), Anita Carillot, Nancy Meloche (Roger), Lauren Payne (Ray), Carol Wagner (Mark) and Janet Hooten (Ken). Devoted grandfather to Alex and Erica Pappas, Madeline, Grant and Scott Wagner, and Graham, Libby, Mara and Jill Hooten. Vince was born on March 25, 1927 in NYC, NY to Rose and Maurice Carillot, their youngest child and only son. He is preceded in death by his two sisters Kim and Bea. Vince was a standout athlete -- and spelling champion – in the New York Public School system. He was recruited out of high school to play football and baseball for Michigan State University. Having never seen the campus in person, he accepted the offer and hitchhiked from New York to Michigan to report for practice. He played both sports until he had a severe ankle injury that prevented him from continuing. He holds both a BS and MBA From Michigan State. Upon undergraduate graduation, and after serving in the Navy, Vince began a high school teaching and coaching career in Michigan. To this day, he still holds the record for winningest high school football coach in the state (East Lansing High School). After high school coaching, he went on to become a Defensive Backs coach for Michigan State University football, under Duffy Daugherty, and recruited standout players like Bubba Smith and George Webster. MSU won the National Championship during his tenure in both 1965 and 1966. Vince then became the head coach for Tulsa and ended his football career as a scout for the Dallas Cowboys. In his early 50’s Vince decided to pursue further education and earned his PhD from the University of Michigan. He worked for the State of Michigan in fiscal planning while writing his dissertation, then began a new career in banking in both Michigan and Georgia. A lifelong Spartan, he was also the color commentator for MSU football. Vince finished his professional career as a Professor of Higher Education at Georgia Southern University. Vince’s passion for football was rivaled only by golf. Although he never picked up a club before age 35, he went on to become an amazing golfer devoting countless hours to learning and improving his game. His quest to play year-round was one of the many reasons he and Lucy moved from Ann Arbor to Savannah in 1989. He played golf until he was 90 years old, when only severe arthritis prevented him from continuing. Some his favorite times were teaching and playing golf with his sons-in-law and grandsons, having never had a son of his own. Vince was an amazing man who embraced life and loved those around him, in particular his wife, Lucy. He adored her and devoted his life to caring for her. Their happy and successful marriage was his greatest joy and accomplishment. He will be deeply missed but will always be remembered lovingly by those who had the privilege of knowing him. Funeral arrangements handled by Baker McCullough Funeral Home, Hodgson Memorial Chapel in Savannah, GA www.bakermccullough.com . Memories and condolences may be shared on their website. Due to Covid-19, no public service will be held. Donations, in his name, can be made to the Bethesda Boys Home of Savannah, a charitable organization to which he was devoted for many years. www.bethesdaacademy.org

The family of Vincent Jean Carillot created this Life Tributes page to make it easy to share your memories.

Send flowers to the Carillot family.