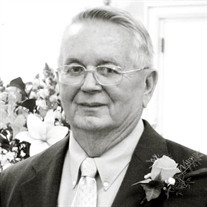 Thomas Levington West, 86, passed away peacefully in his sleep early Sunday, September 27, 2020. Tommy was born in Savannah to Edgar Lenwood West and Katie Bell NeSmith West on May 2, 1934. After graduation from Savannah High School, he joined the US Army where he served in France in the Signal Corps. Tommy married Carolyn King in 1959. He was employed at Great Dane Trailers before joining the FBI in 1964. He retired as Supervisory Technical Information Specialist after 32 years of service. He and Carolyn enjoyed traveling, especially with friends. Tommy was an ace softball pitcher whose knuckleball and quick reflexes earned him the nickname “Cat”. He got great joy in caring for his wife and being with family and friends. Tommy was a faithful, active member of Cresthill Baptist Church for over 50 years and was most recently a member of Southside Baptist Church. He is survived by his wife of 61 years, Carolyn King West, daughter Deborah Price and son-in-law Randy of Cody, WY; son Tommy (Bubba) West, Jr. and daughter-in-law Tina of Savannah; grandchildren Sarah (Matt) Phillips of Statesboro, Katelyn West of Athens and Brittany Price of Cody, WY; great-grandchildren Jude Phillips and Elizabeth Phillips. He is also survived by his sisters-in-law Maree Milliner of Franklin, NC and Jo Ann West of Springfield, GA and several nieces and nephews. He was preceded in death by his grandchildren Katherine Price and Andrew Price, brother Eddie West, sister Lorraine West Speegle and brother-in-law Dwight Speegle. The family will receive friends Wednesday, September 30, 2020 from 5-7 p.m. at Baker McCullough Funeral Home, Hubert C. Baker Chapel, 7415 Hodgson Memorial Drive, Savannah, GA 31406. Burial will be private.

Thomas Levington West, 86, passed away peacefully in his sleep early Sunday, September 27, 2020. Tommy was born in Savannah to Edgar Lenwood West and Katie Bell NeSmith West on May 2, 1934. After graduation from Savannah High School, he joined... View Obituary & Service Information

The family of Thomas Levington West created this Life Tributes page to make it easy to share your memories.

Thomas Levington West, 86, passed away peacefully in his sleep...

Send flowers to the West family.