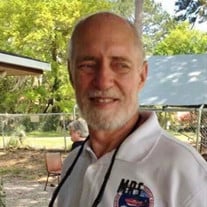 Thomas John “Tom” Butrymowicz, age 73, of Savannah passed away Saturday, September 18, 2021 at home. Tom was born on January 9, 1948 in Miami, FL. He grew up in Greenville, SC and later moved to Savannah. He was a 1966 graduate of Jenkins High School and continued his formal education at Armstrong State College and Savannah Tech. He worked with Gulfstream Aerospace as a Financial Analyst, retiring after 33 years of service. He was a member of St. George’s Episcopal Church and was a longtime member of the Coffee Bluff Marine Rescue Squadron. Tom's greatest passion in life was being a father, but he was also passionate about music. In high school and early adulthood his band, the Sphinx, played venues all over Georgia including the well known Varsity in Atlanta. Tom played the guitar, but was known for playing the organ like no other. He and his wife Debbie could really cut a rug on the dance floor too! Tom loved being outdoors and became an avid fisherman. From fishing offshore to just "tootling down the river with his sweetheart" nothing made him happier than being on the water. One of his greatest accomplishments was when he went back to school at nights at Savannah Vo Tech for welding. There he befriended a high school teacher who told him about the work he did with kids at Groves High School in the vocational technical program. Tom proposed a plan to Gulfstream Aerospace to help the school. Ultimately, teachers were able to train at Gulfstream during plan builds and take that knowledge back to the students at the high school. As the program grew, Gufstream donated tools/supplies and the program flourished. He was really a "Tom" of all trades and late in life loved watching football and cooking shows. He even thought he might go to culinary school, but there was no need as he was a phenomenal cook. His grandkids, who called him Greatdaddy, loved his spaghetti sauce and scrambled cheesy eggs; no one could ever make them like him! Tom was preceded in death by his father, John Butrymowicz and daughter, Jennifer Marie Butrymowicz. He is survived by his loving wife of 33 years, Debbie Yanner; children, Laurie Boone (husband Randell), James F. Yanner, and Amy Yanner; mother, Sandy Butrymowicz; brothers, Robert John Butrymowicz (Jaci) and Michael John Butrymowicz (Barbara); sister, Cindy McNease (Michael); grandchildren, Lyndsey, Luke, and Jaymesen; and many nieces and nephews. A celebration of Tom’s life will be held at a later date. In lieu of flowers, remembrances may be made to the Coffee Bluff Marine Rescue Squadron.

The family of Thomas John "Tom" Butrymowicz created this Life Tributes page to make it easy to share your memories.

Send flowers to the Butrymowicz family.