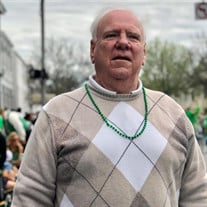 Thomas Anthony Gerard Groover, Sr. passed away suddenly at his home on October 12, 2020. Tom was born on March 26, 1952 and was the first baby in the State of Georgia to survive a complete blood transfusion after being born Rh incompatible. Tom was raised in the Old Fort section of Savannah, attended Cathedral Day School and later Benedictine Military School. He graduated with a bachelor’s in history from Armstrong. Tom was a history teacher at Memorial Day school where he was also the varsity assistant football coach and head coach for the JV boys’ basketball team from 1974-1977. Tom was a master shipbuilder and began his career at Savannah Machine and Shipyard working under the supervision of his beloved father, Jack. His career in shipbuilding would take him all over the world, from Japan to Spain to South Africa. Tom accepted a position as the lead production manager at NASSCO Steel and Shipbuilding in San Diego, Ca and moved his family there in 1992. Tom was solely in charge of the rebuilding of the Exxon Valdez, of which he was incredibly proud. Tom and Lucy moved back to Tybee Island, Ga in 2002;where they continue to reside. He was elected to Tybee City Council in 2012-2013. He was a high ranking official of the Doc’s Bar Tybee Bomb Squad and a licensed boat Captain. He was a parishioner of St. Michael’s Catholic Church. However large his personal accomplishments, nothing made him more proud than his family. A beloved father and friend, Tom devoted his life to his wife of 44 years Lucy and their four children, Megan (Greg), Maureen (Blake), Thomas (Candace), and Corri. His three grandchildren, Leighton, Carson, and Bryce were the light of his life and said his greatest achievement was being able to watch them grow. We are utterly devastated that they will not get to know how truly wonderful a human their grandfather was. Tom is proceeded in death by his parents Jack and Mary Ellen Groover (Rossiter), his infant brother Joseph Aloxious, his sister-in-law, Julie Catherine Owens, and cousin, Julianne Inez Rossiter. He leaves behind his wife, four children, their spouses, three grandchildren, his brothers Jack Jr. (Sandy) and Frank (Linda) and countless nieces, nephews, and friends. The family wishes to acknowledge his life long and closest friends, Kurt Balcom, Pat Holland, Barry Brown, Craig Kendrick, Jason Dubuque, and Mark Schroder who will be his pallbearers. Services will be as follows: Visitation and Rosary held on Sunday October 18, 2020 at Baker McCullough Funeral Home from 4:00-6:00 pm (Rosary held at 5:30pm) located at 7415 Hodgson Memorial Dr. Savannah Ga 31406. Mass of Christian burial will take place on Monday, October 19, 2020 at the Cathedral Basilica of St. John the Baptist at 10:00 am. The family will receive guests at the MRS Shack located at 2 Old Tybee Rd on Tybee Island following the Mass. Masks and social distancing are encouraged. Tom was a survivor of a stroke and an organ donor. He gave the gift of life to many through the procurement of his organs. His final wishes would be to have donations made to Donate Life America at www.donatelife.net or the American Stroke Association at www2.heart.org.

Thomas Anthony Gerard Groover, Sr. passed away suddenly at his home on October 12, 2020. Tom was born on March 26, 1952 and was the first baby in the State of Georgia to survive a complete blood transfusion after being born Rh incompatible.... View Obituary & Service Information

The family of Thomas Anthony Gerard Groover, Sr. created this Life Tributes page to make it easy to share your memories.

Thomas Anthony Gerard Groover, Sr. passed away suddenly at his...

Send flowers to the Groover family.