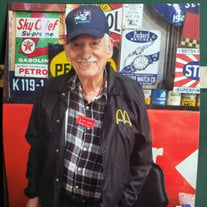 Theodore “Ted” Smith, age 90, of Savannah, Georgia, passed away peacefully on Wednesday, October 28, 2020, surrounded by his loving family. Born in Lexington, Kentucky to his parents Forest Edgar Smith and Bessy Standafor Holly. He is survived by his precious wife of sixty three years, Betty; sons, Tom (Angela), Dave (Lynn), and Steve; grandchildren, Heather, Miranda, Savanna, Summer, Samantha, Alexis, and TJ; great granddaughter, Emilia; his sister, Scarlett; and many nieces and nephews. Husband, father, papa, best friend, airman, and all around great man are words that have been used to describe Ted. Ted proudly served in the United States Air Force during the Korean War. He was a graduate of the University of Kentucky. Before retiring from the federal government, Ted held many leadership positions in Savannah and Atlanta, Georgia. His love of traveling led him to visit over sixty two countries, making lifelong friends around the world. He was a member of the Automobile License Plate Collectors Association, Antique Car Club of Savannah, and the Sun City Stamp Club of South Carolina. He will be dearly missed by his family and friends forever. Ted will be laid to rest at Forest Lawn Memory Gardens in Savannah, Georgia.

The family of Theodore "Ted" Smith created this Life Tributes page to make it easy to share your memories.

Send flowers to the Smith family.