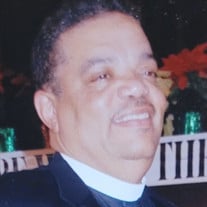 The Rev. Paul Richard Graham, Jr., age 72, of Savannah passed away Saturday, February 19, 2022. Rev. Graham was born on December 10, 1949 in Kansas City, KS, the son of the late Paul Richard Graham, Sr. and Eleanor Thomas Graham. Before living in Savannah he resided in Detroit, MI. He began his career working as an Executive with Hallmark Card and later served as a Pastor. He was the presiding Elder over many churches in Detroit and was the Principal of St. Pauls Academy for Girls in Savannah. In addition to his parents, Rev. Graham was preceded in death by his brother, David Graham. Although he had only one brother, he gained a large loving family who he leaves to cherish his memories, his loving and devoted wife Helen Wynn Graham of Savannah, Georgia; four loving sisters-in-law Cora Scott, Earline (Ernest) Dixon, Queen Winn, and Jeannette Glover and one brother-in-law Sammie (Johnnell) Wynn, Jr. His mother-mentor Norma Jean Dotson from Mount Clemens, Michigan, and two ladies that love him as a brother (Reverend Diane Williams, Savannah, GA and Reverend Sharon Davis from Mount Clemens, Michigan Although he had a host of nieces and nephews and all were extremely special, he had two special two close loving nieces Dianne (David) Miller and Stephanie Johnson. A special grandniece London, who called him granddaddy. A funeral service will be held at 11:00 a.m., Thursday, February 24, 2022 at St. Paul CME Church, 1601 Barnard Street, Savannah, GA 31401.

The family of The Rev. Paul Richard Graham, Jr. created this Life Tributes page to make it easy to share your memories.