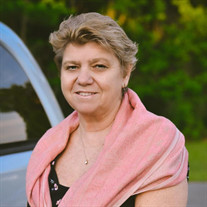 Have you ever awoken in a strange place with a pounding headache, or found yourself in an impossible predicament? For those of us lucky enough to know Teresa Boothe, or as some referred to her as “T”, then your salvation was just a phone call away. If you ever reached out to her for help, those that know her, knew that she would stop whatever she was doing and be there for you without hesitation. Teresa might not appear to have many achievements in life, however the biggest accomplishment that anybody could have was exactly who she was – just one of the kindest, selfless, most enjoyable people that you could ever meet. On Saturday, September 19th, 2020, Teresa Roberts Boothe passed in her home surrounded by family and friends. The same way she departed life is the way she lived. To say Teresa was rich in friendships was an understatement. She never met a stranger in 64 years of life. Whether you needed a shoulder to lean on, or just wanted to savor the moment, Teresa was always a delight to be around. Teresa’s story started in Evans, GA on June 12th, 1956 as the youngest of five children to the late Willis and Erma Roberts. There was never a dull moment, as she often referred to herself as “TNT”, since she was small but would blow up on anyone that meant her family or friends any harm. In her younger years, she enjoyed bowling and would often travel to tournaments where her team always had a good time. However, bowling was more than just fun for Teresa, it is also where she first met her Chuckie. Introduced to her by her sister, Cathy (Bieber), Teresa married the love of her life, Charles “Chuck” Boothe, on January 8th, 1983. The two remained happily married for over 30 years until Chuck passed on February 13th, 2014. As life happened, Teresa eventually found her path to her true home in Savannah, GA by way of layovers in Atlanta, GA, and Daytona Beach, FL. Along the way, she always seemed to surround herself with good people. In Augusta, she was a member of the Eastern Star, and past Matron of the Martinez Chapter #464. Once she arrived in Savannah, she became a Woman of the Moose “WOTM”, and genuinely loved the people that she came to know as her second family. Teresa was a proud member of the Moose and cherished all of the relationships that she developed over the years. When she was alone, Teresa was happiest with a simple day of working in the yard with Tuffy and having a Miller Light. She liked to spend time with family and friends, and most of all being a grandmother. Her favorite place to be was wherever the ocean breeze came upon her and the sand was between her toes. Teresa is survived by her Sister, Cathy (Bieber), Brother, Eddie (Roberts), God Mother, Audrey (O’Keefe), Stepson, Daniel (Boothe), Son, Patrick (Moore), and her beloved Grandchildren, Mayson & Madalyn (Boothe) and Maya & Leah (Moore). Although, she leaves behind so many broken hearts. Teresa was a unique soul with an amazing personality and one of the kindest hearts. If you were lucky enough to be T’s friend, some of your best times were spent with her. We will always love you and treasure your memory. A Memorial Visitation will be held on Thursday, September 24th, 2020 from 5:00PM until 6:00PM at Baker McCullough Funeral Home, Hubert C. Baker Chapel.Dress comfortably. In T's memory, donations may be made to Georgia Animal Rescue and Defense“GARD". GARD accepts donations online at gardonline.org or by mail at 100 Dichroic Dragon Dr., Pembroke, GA 31321.

Have you ever awoken in a strange place with a pounding headache, or found yourself in an impossible predicament? For those of us lucky enough to know Teresa Boothe, or as some referred to her as &#8220;T&#8221;, then your salvation was just... View Obituary & Service Information

The family of Teresa Roberts Boothe created this Life Tributes page to make it easy to share your memories.

Have you ever awoken in a strange place with a pounding headache,...

Send flowers to the Boothe family.