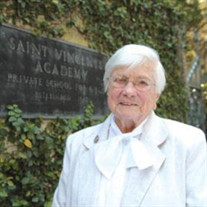 Sister M. Jude Walsh, RSM, died peacefully on Monday, December 7 at the age of 95. A Sister of Mercy for 77 years, Sr. Jude was a pioneer in education, an archivist and an avid sports fan. She is survived by her Sisters of Mercy community, many relatives, friends and legions of Saint Vincent’s current and former alumnae. She is predeceased by her parents Charles and Mildred Walsh, and her sisters Betty (Sr. M. Charlene), Tricia Taylor and Mary Gloria Loncon. Sister Jude entered the Sisters of Mercy in 1943. She earned her undergraduate degree at Mount Saint Agnes, and her Master’s in Education at Loyola College in Baltimore, Maryland. Soon thereafter Sister began a lifelong career in education serving at St. Bernard’s School in Baltimore, Cathedral Day School, St. Joseph’s Academy in Columbus, Nativity of Our Lord School, Blessed Sacrament, and in 1966 began her ultimate long-standing career at Saint Vincent’s Academy. She once said, “Saint Vincent’s is the love of my life.” Sister was the teacher, Principal,archivist, fundraiser, Board member, and all-around cheerleader for the school. Sister Jude led the school through many years of burgeoning women’s rights and affirmation. She believed in the women who attended the school and fostered not only their learning but their growth as the future leaders of the world. Many women in this area freely give their gift of gratitude to this petite 4’9” former basketball player. Her dedication and service to education was recognized in 1993 when Pope John Paul II awarded her the yellow ribboned Benemerenti Award. This award was first given out by Pope Gregory XVI in 1852 in recognition of distinguished work in a civilian or military field. Sister Jude was a gentle giant of wit, intelligence, and energy. On many committees and panels, hers was the voice of logic and thoughtfulness. She was a persistent fundraiser for Saint Vincent’s. Few could refuse her entreaties when asked for help. Her many years of devoted service were rewarded with the dedication of Walsh Hall, the Saint Vincent’s gymnasium in her honor on the campus in 1993. When not at Saint Vincent’s, most days you would find Sister meandering the back river of Tybee island in her small wooden boat-The Ancient Mariner (made by the father of a SVA’s Buckhaults family) being at one with the beauty and bounty of its waters. Many learned how to go crabbing under the watchful eye of Sister Jude. In later years, she came to live at Mercy Convent. She loved her religious community, sweet tea, crushed ice, politics, and football games on all levels but held a special place in her heart for Notre Dame University football. While at the Convent, she dedicated herself to cataloging photos and memorabilia of Saint Vincent’s, her own family history and those of the Sisters of Mercy. As “keeper of the flame”, Sister was an avid collector of all things Mercy and Saint Vincent’s. Sister was the official historian of both and wrote the book “An Enduring Legacy-The Savannah Sisters of Mercy and St. Vincent’s Academy 1845 to 2015.” Sr. Jude dedicated her life shaping and enriching the lives of so many. Sister Jude said, “The person is important. We have to make more effort to focus on our humanity, and the morals that come from it. My advice for all is to keep learning and live happily.” A private burial will take place at the Catholic Cemetery. A Mass of Celebration for Sister Jude will be held at a later date due to the Covid-19 pandemic. Donations made be made to Saint Vincent’s Academy in her honor. Funeral arrangements by Baker McCullough Funeral Home, Hodgson Memorial Chapel.

Sister M. Jude Walsh, RSM, died peacefully on Monday, December 7 at the age of 95. A Sister of Mercy for 77 years, Sr. Jude was a pioneer in education, an archivist and an avid sports fan. She is survived by her Sisters of Mercy community, many... View Obituary & Service Information

The family of Sister M. Jude Walsh, RSM created this Life Tributes page to make it easy to share your memories.