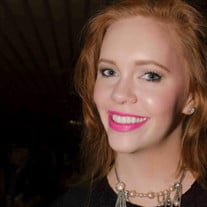 Shannon Elizabeth Mercier, age 36, of Savannah passed away Monday, August 30, 2021 at home. Shannon was born on May 3, 1985 in Savannah, the daughter of Lonnie Mercier and the late Rebecca Barrow Mercier. She was a graduate of Savannah Arts Academy and continued her formal education, ultimately earning her master’s degree in human resources from Jack Welch College of Business. She served as the Campus Director of Strayer University in Savannah and Dean of the Columbus campus. She was the founder, owner and designer of Frankly Scarlett, custom costumes for competitive dance, known nationwide through her "Frankly Scarlett Ambassadors". Shannon also taught dance for years, making personal connections with her students and families. She was an innovative choreographer, using her talents to tell a story through dance and music. She expressed her grief for a beloved aunt and a dear friend by honoring both through her choreography in a solo performance by one of her dancewear ambassadors. Shannon had a passion for dancing and was a longtime student of Doris Martin Dance Studio. Through Instagram/Youtube, Shannon met a young woman with cancer. Eventually she started working with her and they became friends and collaborators to raise funds for childhood cancer through Talia's Legacy. You can donate in her honor at https://www.facebook.com/TaliasLegacy. Shannon was Talia’s first ever YouTube makeup swap. Shannon continued to stay in touch and keep close to her family even after Talia passed away. She attended Glam WARS with them as a makeup artist and always had a smile on her face. She also volunteered with The Kesha Gibson-Carter political campaign and was an advocate for the Rape Crisis Center. Shannon is survived by her father, Lonnie Mercier (Betty); brother, Adam Mercier; and sisters, Amy Moyer, Haley Vatagliano, and Emily Lofton, several aunts, uncles, thousands of cousins, her therapy cat, Liza, her rescue cat, Blossom and many, many friends. Among survivors are Aunt Carolyn and Uncle Mike, known to many of her friends over the years who lovingly still call them "Aunt" and "Uncle". A Celebration of Life Service will be held for Shannon Elizabeth Mercier at 3:00 PM on Sunday, September 19, 2021 at the Fresh Air Home Summerhouse, 900 Butler Avenue, Tybee Island, GA 31328. Family and friends are encouraged to honor Shannon's love of all things artistic by wearing happy colors. An informal repast immediately follows the service. If you are interested in sharing a memory or story, please contact Carolyn Jennelle via Facebook Messenger. In lieu of flowers, remembrances may be made to the Rape Crisis Center of the Coastal Empire, P.O. Box 13954, Savannah, GA 31416.

Shannon Elizabeth Mercier, age 36, of Savannah passed away Monday, August 30, 2021 at home. Shannon was born on May 3, 1985 in Savannah, the daughter of Lonnie Mercier and the late Rebecca Barrow Mercier. She was a graduate of Savannah Arts... View Obituary & Service Information

The family of Shannon Elizabeth Mercier created this Life Tributes page to make it easy to share your memories.

Send flowers to the Mercier family.