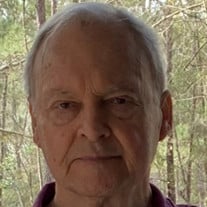 Ronnie E. DeVore of Savannah, Georgia passed away peacefully at his home with his loving wife, and family surrounding him on April 12, 2021 and entered into the presence of God. He fought the good fight with Cancer for 10 months. Ronnie was born in West Augusta, Virginia on December 6, 1948 to Raymond Chester and Mary Coyner Devore. He is preceded in death by both of his parents and a number of siblings. He has left behind his wife, Carolyn Gordon DeVore, his two daughters, Tammy (KK) Ausbon, Brooklet, Ga. Beth (Junior) Morgan Eden, Ga. and 4 Grandchildren and 2 Great Grandchildren. He also leaves behind one sister, Maudie Hyde and one brother, Harry DeVore (Peggy) both of Lyndhurst, Virginia. Ronnie was a veteran of the Vietnam War and served in the Navy on the USS Aircraft Carrier WASP. He served in the Navy from 1968 to 1970. After the Navy he was employed as a Butcher at Reid’s Super Market for two years. His interest in the food service industry led him to Swift & Company where he started as a salesman and received Top Salesman Awards in his division. He eventually worked himself up to become Sale Manager of the Swift & Company Plant in Savannah, Ga. He worked in Staunton, Virginia, Roanoke, Virginia, Greensboro, North Carolina and finally Savannah, GA. until the plant closed in 1987. Ronnie and his wife Carolyn attend The Church at Godley Station The family will have visitation on Wednesday, April 14, 2021 from 10:00 am to 11:00 am at the Baker-McCullough Funeral Home, 2794 West US Highway 80, Garden City, Ga. 31408, Funeral Services will begin at 11:00 am. Graveside services will be held at Westside Memorial Cemetery off Adams Street in Bloomingdale. Ga. following the funeral service The family would like to thank Dr. Mohammad A. Masroor for the 26 years of great health care that he and his staff gave to Ronnie and Hospice of Savannah for the heartfelt care and love that they gave Ronnie and the entire family during the time of transition. In lieu of flowers the family request that donations be made in his memory to Hospice of Savannah, 1352 Eisenhower Drive, Savannah, Ga. 31406 or The Church at Godley Station, 1601 Benton Blvd, Savannah, Ga. 31407. Please sign our online guestbook at www.bakermccullough.com Services have been entrusted to Baker McCullough Funeral Home Garden City Chapel, 2794 West US Highway 80 Garden City, GA 31408. (912) 964-2862. www.bakermccullough.com

Ronnie E. DeVore of Savannah, Georgia passed away peacefully at his home with his loving wife, and family surrounding him on April 12, 2021 and entered into the presence of God. He fought the good fight with Cancer for 10 months. Ronnie was... View Obituary & Service Information

The family of Ronnie E. DeVore created this Life Tributes page to make it easy to share your memories.

Send flowers to the DeVore family.