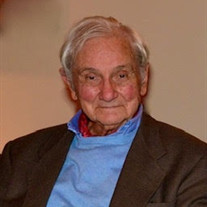 Robinson Callen passed away peacefully in his sleep on April 2nd at the age of 96 in Savannah, Georgia. He was surrounded by the enduring love of his family in a city that he did not exactly hail from, but on which he left an indelible mark. Robinson was an adventurer, a consummate gentleman, an erudite businessman, and the truest embodiment of the American dream. Casper Robinson Callen Jr. was born in 1925 in Stamford, Connecticut to Casper "Cappy" R. Callen and Florence Mooney Callen. Cappy co-owned the Manhattan real estate firm Hanfield, Callen, Ruland and Benjamin and this business is what helped spur Robinson Callen's love of the real estate game. Robinson grew up in Nyack, N.Y. and at the age of 18, he enlisted in the U.S. Army and served in World War II. He later utilized the GI Bill to attend Yale University, where he entered the ROTC program. Upon graduation, he served in the U.S. Army during the Korean War, achieving the rank of Captain. After spending some years in Japan following the Korean War, he returned to New York where he began building a real estate portfolio, eventually developing hotels in the Southeast, starting with Florida. The growth of his family-owned venture, H.I. Development, spawned numerous hotel companies all over the world. Due to his friendship with Kemmons Wilson, the founder of the Holiday Inn brand, Robinson was the first person to bring the Holiday Inn chain to Europe. H.I. Development remains one of the leading privately owned hotel management and consulting companies and holds offices in Tampa and Miami Beach, Florida; Savannah, Georgia and San Juan, Puerto Rico. Robinson's proudest achievement, however, was the enduring legacy of his beloved children and grandchildren. His fourteen children listed from oldest to youngest are: Lance Callen, David Callen (deceased) (sons of Ruth), Lana Callen, Claire Callen, Robin Callen, (son and daughters of Toshiko), Tarquin Callen, Justine Callen Bohannon, Dorian Callen, Desiree Callen O'Neill, Sean Callen, Andre Callen, Ian Callen, (sons and daughters of Charlotte) Tara Callen Roa, and Justin Callen (son and daughter of Jan). Robinson was grandfather to 39 grandchildren and 14 great grandchildren. He is also survived by his nephew Herbert Jones; his nieces, Christine Jones Huber, Callen Jones McJunkin and Adelyn Jones; and by his cousin, James K. Mooney. Robinson Callen was cared for in his final days by his loyal, generous and much adored assistants Carol Porterfield and Heather Coleman, alongside the outstanding nurses and staff of Azalealand. He will be laid to rest alongside his late wife, Jan Callen, at Bonaventure Cemetery in Savannah. The family will be receiving friends from 4:00 - 6:00 p.m., Wednesday, April 13, 2022 at Baker McCullough Funeral Home, Hodgson Memorial Chapel, 7415 Hodgson Memorial Drive, Savannah, GA 31406. A funeral service will be held at 2:00 p.m., Thursday, April 14, 2022 at Baker McCullough Funeral Home, Hodgson Memorial Chapel with burial following at Bonaventure Cemetery. In lieu of flowers, the family asks for donations to be sent to St. Jude's Children's Research Hospital, 262 Danny Thomas Place, Memphis, Tennessee 38105 or the Humane Society for Greater Savannah, 7215 Sallie Mood Drive, Savannah, Georgia 31406.

Robinson Callen passed away peacefully in his sleep on April 2nd at the age of 96 in Savannah, Georgia. He was surrounded by the enduring love of his family in a city that he did not exactly hail from, but on which he left an indelible mark.... View Obituary & Service Information

The family of Robinson Callen created this Life Tributes page to make it easy to share your memories.

Robinson Callen passed away peacefully in his sleep on April...

Send flowers to the Callen family.