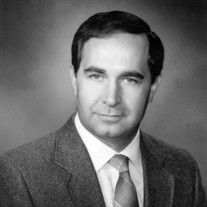 Robert Edgar Reavis, 84, of Savannah, GA passed away November 19, 2020 at Memorial Medical Center. He was born to the late Thomas Edgar and Layla Jones Reavis March 9, 1936 in Henderson, North Carolina. He joined the United States Air Force at the age of 18 and was stationed at Hunter Army AirField in 1954. While in Savannah he met the love of his life, Betty Jean Banks, and the two were married at Calvary Baptist Church in 1956, where the family remain members today. He was the Business Manager for IBEW #1301, a Real Estate Broker for Ruth Cohen Real Estate, and retired from SEPCO, where he was the Director of Safety for many years. Over the years, he has held various positions throughout the community and in the church. He served as Vice Chair of the Deacons at Calvary Baptist, a Member of the Gideons, and served on the Board of Len Turner Ministries. He accomplished much in his life, but the most important to him was his faith in the Lord Jesus Christ and the church. He would often witness to anyone he came in contact with. In addition to his parents, he is preceded in death by a son, Craig Thomas Reavis. Surviving are his wife of 65 years, Betty Jean Banks Reavis; a son, Mark Alton Reavis; a daughter, Lisa Ann Reavis, all of Savannah; seven grandchildren, Mark Alton Reavis, Jr., Anna Elizabeth Reavis, Christopher Lynah Reavis, Matthew Raymond Grooms, Adam Robert Grooms, Timothy Alton Grooms, and Daniel Jeffrey Grooms; a brother, Alvin Reavis; two sisters, Betty Jean Jones and Anne Davis, all of Henderson, NC. Services will be Private. In lieu of flowers, remembrances may be made to Calvary Baptist Temple 4625 Waters Ave. Savannah, GA 31404 or Gideons International 32 E Montgomery Crossroad Savannah, GA 31406.

The family of Robert Edgar Reavis created this Life Tributes page to make it easy to share your memories.

Send flowers to the Reavis family.