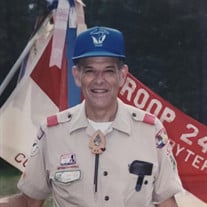 Robert Lee English, age 91, passed away Wednesday, May 18, 2022. Known to friends as Bob, he was born here in Savannah, Georgia to the late Evelyn Jessie Groover and Thomas Franklin English Sr. Bob served in the United States Air Force as a Radar Mechanic and Tech Instructor. A few years after separating from the Air Force, he graduated from Georgia Tech with a degree in Electrical Engineering. Bob was a member of Eta Kappa Nu honors society, and graduated third in his class. He went on to work and retire from DWG Inc. after 28 years. Bob was a devoted husband and father. He was married to Joan Harrison English for 66 years. Bob's proudest accomplishment in life was being a Scoutmaster for 55 years. He led Troop 24 which was based out of Montgomery Presbyterian Church for many years. Bob was a recipient of the Silver Beaver Award, and Vigil Honor which is the highest honor that the Order of the Arrow can bestow upon its members for service to lodge, council, and Scouting. Bob founded the “Father Son Scout Freeze-Outs” with the help of Julius Drake and "Preacher". Over 40 years later, Boy Scouts of America still look forward to this event which is held annually. The camping weekend at Black Creek Scout Reservation, has remained a volunteer-supported weekend program offering a multitude of outdoor activities, games and competitive sports events for local Scouting units. It was designed much like an old-fashioned Scout Camporee. Bob is preceded in death by his parents, two brothers, and a nephew. Bob is survived by his wife, Joan Harrison English; his son, Robert Harrison English; his daughter, Beverly English; his grandchildren, William Harrison English Sr. (Lindsay), Benjamin McCluskey English; one great grandchild, William Harrison English Jr.; one sister, Betty (Glaen) Richards; a niece, Janet Fields; and two nephews, Jerry Fields, and Jimmy English. The family will be receiving friends from 5:00 p.m. to 7:00 p.m., Friday, May 27, 2022 at Baker McCullough Funeral Home, 7415 Hodgson Memorial Drive, Savannah, GA 31406. A funeral service will be held at 10:00 a.m., Saturday, May 28, 2022 at Baker McCullough Funeral Home, Hubert C. Baker Chapel with Rev. Dr. Mark Giuliano officiating. A burial will follow the funeral service at Forest Lawn Memory Gardens. In lieu of flowers, please consider donating to Montgomery Presbyterian Church or Boy Scouts of America. http://www.mpcsavannah.com/donate2.html https://donations.scouting.org/#/national

Robert Lee English, age 91, passed away Wednesday, May 18, 2022. Known to friends as Bob, he was born here in Savannah, Georgia to the late Evelyn Jessie Groover and Thomas Franklin English Sr. Bob served in the United States Air Force as a... View Obituary & Service Information

The family of Robert "Bob" Lee English created this Life Tributes page to make it easy to share your memories.

Send flowers to the English family.