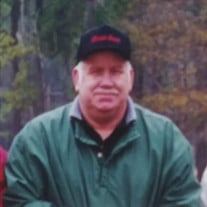 Richard “Ricky” Thomas Kirby, 75, passed away early Sunday morning, December 13, 2020 at St. Joseph’s Hospital. Ricky was born on December 10, 1945 in Spartanburg, South Carolina to Barney and Pauline Kirby. Shortly thereafter, the family relocated to Thunderbolt, Georgia. He graduated from Savannah High School in 1963. In 1967, he joined the Georgia National Reserves where he served for several years. Ricky was married to Juanita Lord on June 1, 1968; they were married for 18 years. Ultimately he went to work for Great Dane Trailers where he retired after 42 years of service as a plant supervisor. During the 1970’s at Great Dane, he was part of the Red Devils bowling league and softball teams which he loved very much. He was still an active participant of the Great Dane retirement men’s group and would attend their monthly breakfast gathering. Ricky was an avid golfer and tried to golf every Saturday with friends. He got his most recent hole in one at the Bacon Park Golf Course on the 14th hole on April 16, 2016. This was his second hole in one of his life. He also enjoyed drinking a cold beer in his gazebo, the Georgia Bulldogs, Nascar racing, gardening and spending time with his daughter and son-in-law. Ricky is survived by his daughter, Kimberly Dawn Vizcarrondo and her husband Luis of Clearwater, Florida, Richard Shelby Kirby and his wife Beth of Guyton, Georgia, and stepson Tripp Meachem of Richmond Hill, Georgia. He was preceded in death by his parents, Barney and Pauline and by his second wife Jean Meachem. A time of gathering will be held on Saturday, December 26 at 10 a.m. at the Hillcrest Abbey Cemetery at 1336 Dean Forest Road in Savannah, Georgia. One last toast to Ricky is set for the Knights of Columbus at 700 Christopher Drive in Savannah, Georgia at noon. In lieu of flowers, memorial donations can be made to the American Cancer Society: https://www.cancer.org/involved/donate.html and St Jude’s Children’s hospital: https://www.stjude.org/donate

The family of Richard "Ricky" Kirby created this Life Tributes page to make it easy to share your memories.

Send flowers to the Kirby family.