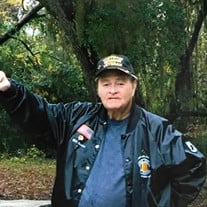 Raiford Lee “Bill” Ennis, Jr. passed away at home on April 28, 2022 after an extended illness. Mr. Ennis was born in Savannah, GA at the old Telfair Hospital on December 12, 1947. He was a graduate of Jenkins High School. He was a Vietnam Veteran of the United States Air Force and served his country proudly. He served with the Savannah Police Department, retiring in 2007 after 32 years of service. He received several awards and accomplishments during his law enforcement career. He was a member of the Fraternal Order of Police, he was a Mason, and a member of the DAV. He married the love of his life, Neva M. Wells Ennis on June 2, 1967. Mr. Ennis was preceded in death by his parents, Raiford Lee Ennis, Sr. and Henrietta Autry Ennis; his brother, Jesse A. Ennis; and grandson, Aaron Michael Ennis. He is survived by his wife, Neva W. Ennis; his son, Billy and 2 daughters, Alyssa and Katie; his sister, Judy Ohirogge; 2 grandchildren, Brandon Ennis (Kat) and Kayla & JC Vasquez; mother-in-law, Nell Tuten; 8 great grandchildren, Maddox, Hayden, Kendra, Braiden, Jayden, Nina, Nessie, and Elisio; brother and sister-in-law, Mike & Jan Wells; several nieces & nephews; other family members; and his devoted and faithful baby, Thunder. A funeral service will be held at 3:00 p.m., Sunday, May 1, 2022 at Baker McCullough Funeral Home, Hodgson Memorial Chapel, 7415 Hodgson Memorial Drive, Savannah, GA 31406. The family will be receiving friends from 2:00 p.m. until the time of the service. In lieu of flowers, please consider donations to GHC Hospice or the 200 Club of the Coastal Empire.

The family of Raiford Lee "Bill" Ennis, Jr. created this Life Tributes page to make it easy to share your memories.