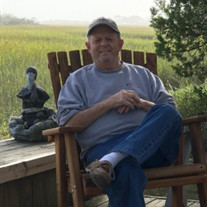 Phillip Edwin Aulwes died Sunday, October 3. He was born on October 12, 1944 to Phillip Aulwes and Mildred Scheueneman in Minneapolis, MN. After graduation from Washburn High and the University of Minnesota, Phil received his masters in Radiology Administration from the University of Cincinnati. He served as Vice President of Wausau Hospital in Wisconsin before moving to Savannah as Director of Radiology at Memorial Hospital. Phil didn’t like the heat in Savannah but found love and family southern style with JoAnn and the big Leonard clan. Fleeing the hot weather until he could retire and play golf in the morning, Phil then moved to Cape Cod Hospital until he retired and returned to Savannah. Phil was preceded in death by his parents and brother, Jim. He is survived by his wife JoAnn who cared for him until the end, his sisters, Joanne Taft and Judy Johnson and brother, Jeff (Lavonna), his beloved daughters, Jennifer Madigan (Sean) and Katie Latham (Daniel), sister in law Mary Ellen Leonard and brothers in law Bubba and Michael (Kay) Leonard, stepchildren, Keith Phillips (Julia), Michelle Gant (John) and Mark Harvey (Carissa), and step grandchildren John Michael, Mallory, Jenna, and Madison Gant and nieces and nephews. Last, and certainly not least, are the loves of his life, his grandchildren, Jean, Oliver, and Millie Madigan and Maeve and Quinton Latham. There will be no visitation and the funeral will be a private family service in Savannah on Friday, October 8. There will be a family service in Minnesota at a later date. Phil may have lost his heart in Savannah but he had strong ties to his Minnesota family. His niece, Dana, flew to Savannah and flew Phil to Minnesota for a final visit before his dementia kept him from traveling. Phil often said that it was such a wonderful trip and they treated him like a king! We would like to thank friends and family and Ann and Kenny Gagne and the staffs at both The Oaks and Hospice Savannah for all they did to bring sunshine to Phil’s last days. In lieu of flowers, the family requests donations to be made to Hospice Savannah. Everyone knows that Will Rogers never met a man he didn’t like. Those of us who knew Phil know that Phil didn’t either and those who met him returned the favor. Phil embraced life and enjoyed it to the fullest. He never had a golf game he didn’t like, went to a restaurant he didn’t like, had a drink he didn’t like, or took a trip he didn’t like. Phil loved to play cards, poker (Texas Hold’em) in particular. Later in life, he took up bridge and was an enthusiastic player; however his partners always had to remind him that bridge is the opposite of poker. In bridge you work with your partner and don’t try to fool him! He took the criticism as he did everything….with a good natured smile. After a successful career, Phil got dealt a bad hand….dementia. Recently physical illness and dementia weakened him to the point that, being a good card player, he knew when to fold’em and he left us for a better game than on earth.

Phillip Edwin Aulwes died Sunday, October 3. He was born on October 12, 1944 to Phillip Aulwes and Mildred Scheueneman in Minneapolis, MN. After graduation from Washburn High and the University of Minnesota, Phil received his masters in Radiology... View Obituary & Service Information

The family of Phillip Edwin Aulwes created this Life Tributes page to make it easy to share your memories.

Send flowers to the Aulwes family.