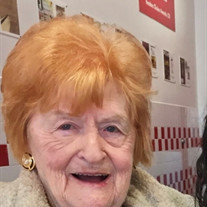 Peggy Gattis Edenfield, of Savannah, went Home to be with the Lord on Friday, April 1, 2022. Mrs. Edenfield was born in Savannah on March 29, 1931 and celebrated her 91st birthday last month. She is the daughter of Normie and Marie Gattis and was a graduate of Commercial High School. She worked at Calvary daycare and then went on to operate Pitty Pat Daycare out of her home, where she lovingly made fried bologna sandwiches for the children in her care. Peggy was a member of Calvary Baptist Temple. She loved watching Calvary basketball games where her children attended school - and when her son became the head basketball coach at Savannah Christian Preparatory School, she also cheered for the Raiders. Peggy was happiest when her family was all together as she loved to spend time with them all. She is survived by her daughter, Jane Dearing (Kennon) and their children, Sarah Swagert (Curtis), Matthew Dearing (Hannah), and Daniel Dearing; her son, Ralph Steven Edenfield (Kristine Edenfield) and their son, Luke Edenfield; her four great-grandchildren, Joshua, Camden, Jackson, Shepard; her best friend, Ralph Finnegan; niece, Linda Niblett; and nephew, Richard Joyner. She was preceded in death by her husband, Ralph Edenfield, who was a WWII veteran; her siblings, James Gattis, Norma Joyner, Rayford Gattis, and Betty Thaggard; her nephew, Michael Joyner; and niece, Donna Thaggard. A funeral service will be held at 5:00 p.m., Sunday, April 10, 2022at Baker McCullough Funeral Home, Hubert C. Baker Chapel, 7415 Hodgson Memorial Drive, Savannah, GA 31406. Peggy loved receiving flowers, but always said to give them to her while she was alive, and not at her funeral. In lieu of flowers, the family requests that you make a donation in Peggy’s memory to Savannah CASA (Court Appointed Special Advocates), an organization that helps support abused and neglected children. The family has chosen Savannah CASA because before Steven was born, Ralph and Peggy had a foster child named Randy. Remembrances may be sent to Brightside Child and Family Advocacy/Savannah CASA, 761 Wheaton Street, Savannah, GA 31401 or online at https://savannahcasa.networkforgood.com/projects/141960-annual-giving-campaign-2022 A private interment will take place at Bonaventure Cemetery. “The Lord himself goes before you and will be with you; he will never leave you nor forsake you. Do not be afraid; do not be discouraged.” Deuteronomy 31:8

Peggy Gattis Edenfield, of Savannah, went Home to be with the Lord on Friday, April 1, 2022. Mrs. Edenfield was born in Savannah on March 29, 1931 and celebrated her 91st birthday last month. She is the daughter of Normie and Marie Gattis... View Obituary & Service Information

The family of Peggy Gattis Edenfield created this Life Tributes page to make it easy to share your memories.

Peggy Gattis Edenfield, of Savannah, went Home to be with the...

Send flowers to the Edenfield family.