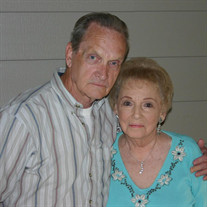 Paul Stewart, Sr., 92, of Port Wentworth passed away peacefully Wednesday, January 12, 2022 at his home surrounded by his loving family. What's in a name? What's in your name? Have you ever thought about it? My name is Christopher but that's not important here. My last name is Stewart. That's the name that connects and binds my family. However it's my middle name that has always meant so much to me. My middle name is Paul and Paul is the man's name I'm celebrating. Actually, he was known by a few names including Big Paul, Pops, Paul Sr., PaPa, Big Grandaddy, or as I know him, Grandaddy. Over the years Grandaddy wore many hats. Son, Brother, Soldier, Husband, Father, Technician, wood worker, auto mechanic, all around handyman, cake baker, candy maker, and on and on. Grandaddy met Hilda (Driggers as he called her to mess with her; she would just role her eyes) the love of his life as a child. Grandaddy and Grandma were married in the 40's right out of WWII and were married 64 years prior to Grandma's passing in 2013. Grandaddy along with Grandma raised two boys, Paul Stewart, Jr. (Becky) and Harry Stewart (Lucile) and those two boys raised families of their own. He was an avid hunter for many years and was with his two sons and three grandkids when each killed their 1st deer. He loved to be outside and loved working in the yard. You can't blink your eyes around all of our homes and not see his handprints on something. In my eyes my Grandaddy could move mountains. He's with Grandma now and "they are holding hands forever". He's missed her dearly. Our world and our hearts won't be the same without him but Grandaddy's tree has many branches now; Kids, Grandkids, and Great Grands. We will keep on and will always cherish the time we've had along with the names. Services will be private. Please sign our online guestbook at www.bakermccullough.com Services have been entrusted to Baker McCullough Funeral Home Garden City Chapel, 2794 West US Highway 80 Garden City, GA 31408. (912) 964-2862. www.bakermccullough.com

Paul Stewart, Sr., 92, of Port Wentworth passed away peacefully Wednesday, January 12, 2022 at his home surrounded by his loving family. What's in a name? What's in your name? Have you ever thought about it? My name is Christopher but that's... View Obituary & Service Information

The family of Paul Stewart, Sr. created this Life Tributes page to make it easy to share your memories.