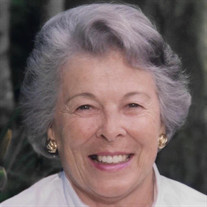 Nirene Pollard Stewart, formerly of Westerly, Rhode Island, passed away on August 11, 2021, in Savannah, Georgia. She was born in Daytona Beach, Florida, on January 28, 1926, the only child of Muriel Bolen Pollard and Edmund G. Pollard. She was the loving wife of Robert W. Stewart Sr. (Bob), who predeceased her in 2007. They were married for 60 years. Nirene, or “Nene” as she was called by her family, lived a long, full life filled with family and friends. She grew up in Maine and Massachusetts, attending boarding school in New Hampshire. As a young girl she competed in horse shows with her beloved American quarter horse, Dixie Lee, and won several championships. While a student at Endicott College in Beverly, Mass., she and her friends were shopping in Boston when they met a group of young naval officers on a street corner. One of them was Bob Stewart, a student at Harvard Business School and a lieutenant JG in the Navy. They were married two years later, on May 27, 1947, in Boston. The Navy, and then Bob’s career, would take them all over the country, from Washington, D.C., to Hawaii, Michigan to Texas. They would ultimately split their retirement between Boynton Beach, Florida, and Westerly, Rhode Island. Of all of the places Nirene lived and visited, Maine was always “home." Nirene was happiest when surrounded by her husband, children and grandchildren. She is survived by her daughter Anne Callaghan and her husband Michael, her daughter-in-law Deborah Stewart, and five grandchildren—Sean Callaghan and his wife Marsia; Megan Callaghan and her partner, Austin; Eric Callaghan and his fiancée, Caitlin; John Stewart and his wife Alexandra; James Stewart and his daughter, Ella (Nirene’s great-granddaughter). Her son, Robert W. Stewart Jr., predeceased her in 2015. Special thanks go to all of the staff at Harmony at Savannah, who provided Nirene and her family with the utmost professional and compassionate care at the end of her life, especially Ronnie, Jennifer, Neisha and Amy (Amedysis Hospice), who cared for her so lovingly during her final days. Funeral services will be private. Burial will take place at Laurel Hill Cemetery in Saco, Maine. In lieu of flowers, please consider donating to, The American Brain Foundation in honor of Ms. Nirene Stewart. https://give.americanbrainfoundation.org/give/346367/#!/donation/checkout

Nirene Pollard Stewart, formerly of Westerly, Rhode Island, passed away on August 11, 2021, in Savannah, Georgia. She was born in Daytona Beach, Florida, on January 28, 1926, the only child of Muriel Bolen Pollard and Edmund G. Pollard. She... View Obituary & Service Information

The family of Nirene Pollard Stewart created this Life Tributes page to make it easy to share your memories.

Send flowers to the Stewart family.