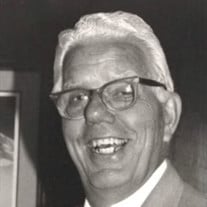 Nicholas Faulk George, 99, passed away peacefully on February 4, 2021. He was born September 23, 1921 in Savannah, Georgia to the late Victor Nicholas and Mary Evelyn (Finch) George and was predeceased by his sister, Mary Ellen Greenwood. He is survived by his wife of 74 years, Mary (Register) George. He is loved and will be sorely missed by his many family members and friends. Nick had a contagious smile and laugh. He had a heart of gold and was always willing to help someone in need. He was a veteran of the United States Army where he served during World War II. Following his military tenure he completed his formal education at Armstrong State College. He worked at the US Post Office as a clerk, loading and unloading trucks, until he worked his way up to Manager of Customer Service during his dedicated 44 years. He had a huge love for animals, especially for his dogs and his horse, Sport, who he so proudly rode in the St. Patrick’s Day Parades many years ago. He took pleasure in traveling to the Georgia mountains and flying to his father’s native country, Greece. He enjoyed bowling and could cut-a-rug on the dance floor. He attended Blessed Sacrament Catholic Church, was a member of the Sertoma Club, the Happy Geechees, and the German Country Club, but his most precious asset was his wife, Mary, who was always by his side. A graveside service will be held Monday, February 8, 2021 at 2:30 p.m. at Forest Lawn Memory Gardens. In memory of Nick, please make a contribution to the Humane Society for Greater Savannah, 7215 Sallie Mood Drive, Savannah, Georgia 31405.

Nicholas Faulk George, 99, passed away peacefully on February 4, 2021. He was born September 23, 1921 in Savannah, Georgia to the late Victor Nicholas and Mary Evelyn (Finch) George and was predeceased by his sister, Mary Ellen Greenwood. He... View Obituary & Service Information

The family of Nicholas Faulk George created this Life Tributes page to make it easy to share your memories.

Send flowers to the George family.