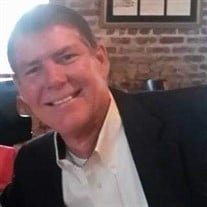 Michael W. “Mike” Russell, age 60, of Savannah passed away Sunday, February 28, 2021. Mr. Russell was born on October 4, 1960 in Orlando, FL. He was raised in Savannah and was a 1978 graduate of Windsor Forest High School. Mike had a successful career in logistics. In 1981, he began his career as a boarding agent with Smith & Kelly Shipping Company. Beginning in 1991, he continued to Norton Lilly International. After several years, he joined China Shipping (North America) Agency Co. where he was the General Manager of the Southeast region. Mike dedicated over 30 years of service to the maritime transport industry, an industry and work that he truly loved. One of his saddest days was in 2016 when his health forced him into an early retirement. Walking away from his beloved waterfront was something he never did get over. Mike loved to have a good time and he always put a smile on the faces of those around him. He was charming, funny, and never met a stranger. Saturdays in the fall you could always find him yelling “Go Dawgs” as he cheered on the Bulldogs. UGA football was one of his greatest passions. He was also a fan of the Atlanta Falcons and Atlanta Braves, a lover of golf, and a true weather enthusiast. Music of all genres touched his soul and it was not uncommon for Mike to bust out his dance moves anytime music was playing. Every year, he looked forward to the St. Patrick’s Day festivities with friends and family. He was very proud of his Scotch-Irish heritage. There is no doubt about his heavenly status as he had a deep relationship with Jesus. Attending Mass at the Cathedral Basilica of St. John the Baptist and church at Compassion Christian Church – Henderson Campus brought him so much joy and peace. At the end of the day, there is no doubt that Mike Russell was a compassionate and caring man with many passions. But when all was said and done, his very heartbeat was the love he had for his family which was like no other. Mr. Russell was preceded in death by his mother, Georgeanne W. “Ann” Broughton. He is survived by his loving wife of 9 years, Therese D. Russell; children, Meredith Russell Michael (Jonathan), Mason Daniel Russell, Matthew Peregoy, Brianne Becker (Justin), Hayley Kenny (Robert “Rudy”), and Hannah Peregoy; and 7 grandchildren to whom he was affectionately known as Pop Pop. The family will be receiving friends from 5:00 – 7:00 p.m., Thursday, March 4, 2021 at Baker McCullough Funeral Home, Hubert C. Baker Chapel, 7415 Hodgson Memorial Drive, Savannah, GA 31406. A funeral service will be held at 11:00 a.m., Friday, March 5, 2021 at Baker McCullough Funeral Home, Hubert C. Baker Chapel with burial following at Forest Lawn Memory Gardens. In lieu of flowers, remembrances may be made to the Nancy N. and J.C. Lewis Cancer & Research Pavilion, 225 Candler Drive, Savannah, GA 31405.

The family of Michael W. "Mike" Russell created this Life Tributes page to make it easy to share your memories.

Send flowers to the Russell family.