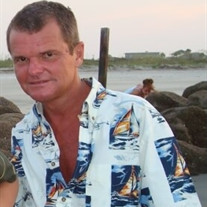 Michael (Mike) Elliot O’Quinn passed away on June 15 at 10:23 am after a short battle with brain cancer. At an early age Mike began his career in South Florida working in the boat industry with Bertrum and Hatteras as a mechanic and later worked in boat design and construction. After moving to Savannah, he continued to work with boats and later worked as a carpenter craftsman for the Local 256 Union. Mike was an avid Georgia Bulldogs fan and the ultimate outdoorsman who loved to hunt, fish and kayak. Most of all Mike loved making new friends and never met a stranger. He had the talent to do almost anything he attempted, and he loved to help others. Mike was very devoted to his mom (Shirley) and will be missed by so many such as his church family, the Rock and Rollers Sunday School Class, Shirley’s Friendship Class, and Statesboro High School class of 1955. Even though Mike struggled the past few months he continued to walk, and bike ride around the Wilmington Island area until his body could take no more. He never gave up and continued his valiant fight. His activities at the First Baptist Church of the Islands and the weekly men’s breakfast were some of his most cherished things to do. His love for his church and his church family meant so much to Mike. He is preceded in death by his father, Harry C. O'Quinn Jr. of Wilmington Island. Mike is survived by his mom, Shirley Allen O’Quinn of Wilmington Island; his devoted brother, Harry (Pat) C. O’Quinn III; sister-in-law, Tina O’Quinn; much-loved nephew, Patrick Ryan O’Quinn from South Florida; his aunts and uncles, JuJuan Allen Harper, Aunt Jackie, Uncle Billy Stewart, Aunt Carlene, and Uncle Rusty Peacock. The family will be receiving friends at the First Baptist Church of the Islands at 6613 Johnny Mercer Blvd, Savannah GA 31410 on Saturday, June 25th at 1:00 pm. A memorial service will follow with Reverend Brooks Cail officiating the service. In lieu of flowers please send contributions to the First Baptist Church of the Islands. https://www.fbcislands.com/give

Michael (Mike) Elliot O&#8217;Quinn passed away on June 15 at 10:23 am after a short battle with brain cancer. At an early age Mike began his career in South Florida working in the boat industry with Bertrum and Hatteras as a mechanic and later... View Obituary & Service Information

The family of Michael Elliott O'Quinn created this Life Tributes page to make it easy to share your memories.

Customized sympathy cards. Mailed for you.