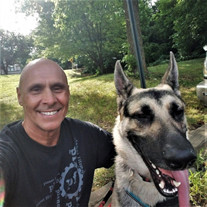 Michael A. Bianco, Sr. died on February 4, 2021 from complications as a result of Covid-19 in Savannah, GA. He was 63. Michael was born on August 15, 1957 in Chieti, Italy, where he was later adopted by his beloved parents, Angelo and Kathleen Bianco. He spent his childhood in Greece, playing sports, smiling, and suntanning on a beach with his sister, Lisa. When he was 16, his family moved back to the U.S. and lived in McLean, VA. He was a graduate of Langley High School and went on to graduate from Villanova University, earning a degree in Accounting. For most of his career, Michael was an auditor for the Department of Defense. He was passionate about serving his country as he traveled overseas to fulfill his duties. His most recent roles were Senior Auditor with the Special Inspector General for Iraq Reconstruction and Special Inspector General for Afghanistan Reconstruction. Michael dedicated his life to raising his ten children and took on the role of both parents when their mom passed away in 2010. He loved in ways that seem small – checking all the things on your car to make sure it was safe to drive, standing on the sideline at every soccer game or sporting event he could attend, wrapping up toilet paper and paper towels as Christmas gifts, proudly sporting all their college stickers on his vehicle’s rear window. There is no other person who could be a single parent to ten kids so effortlessly. Through every obstacle they faced, he was there. He was their glue. He lifted them up, cheered for them, supported them, praised them, encouraged them, motivated them, inspired them, and loved them with every fiber of his being. He gave everything and more to his children and grandchildren. Michael is survived by his ten children, Michael Bianco, Jr. (Jennifer), Brittany Shields (Mike), CatieJo Black (Tyler), Melanie Bianco (Aaron Clifton), Sean Bianco (Nicole), Nicholas Bianco (Tyler), Kimberly Bianco (Clay Bomberger), and Robert, Juliana, and Susannah Bianco; his ten grandchildren, Ayden, Liam, and Meadow Bianco, Gracie, Addison, and Brayleigh Shields, Savannah and Hollis Black, and Everett and Emma Bianco; his sister Lisa Jesseman (Greg); many aunts, uncles, cousins, and nieces; and his best bud, his dog, Caesar. He was preceded in death by his parents, Angelo and Kathleen Bianco. A funeral service will be offered in the coming months. In lieu of flowers, donations can be made to the National Association for Down Syndrome.

Michael A. Bianco, Sr. died on February 4, 2021 from complications as a result of Covid-19 in Savannah, GA. He was 63. Michael was born on August 15, 1957 in Chieti, Italy, where he was later adopted by his beloved parents, Angelo and Kathleen... View Obituary & Service Information

The family of Michael A. Bianco, Sr. created this Life Tributes page to make it easy to share your memories.