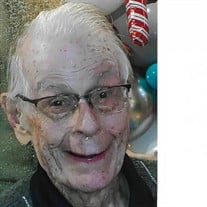 Merrill Clark Miller, age 97, of Savannah passed away Wednesday, April 13, 2022. He died peacefully, listening to stories about his grandkids and surrounded by love. Mr. Miller was born on December 12, 1924 in Detroit, MI, the son of the late Hazen and Marguerite Clark Miller. He was a veteran of the United States Army, serving honorably during World War II. He spoke more frequently of his experiences with the 99th Infantry in old age and remained a staunch opponent of war, movies that glorified war and video games that celebrated war. His division in the war was engaged by a vastly superior force of German units. Although outnumbered and relatively inexperienced, his 99th Division (nicknamed "The Battle Babies") managed to hold off the critical Northern shoulder of the Battle of the Bulge, substantially delaying the German timetable. It was a big deal - yet he didn't speak of it much until later in life. Following his military tenure, Merrill began his formal education at the University of Michigan where he earned a degree in engineering. He worked with Ford Motor Company as an engineer and retired after 35 years of service. Merrill enjoyed model airplanes and cars; was a car enthusiast, photographer, and also enjoyed sailing. (His son picked up this passion and sailed extensively; his daughter ran their sailboat into the dock repeatedly and was banned from sailing after that.) He traveled extensively after retirement with his beloved wife and enjoyed sharing photos from their adventures. He took great joy in his grandchildren and often expressed pride in his own 2 children. (Although it was sometimes accompanied by how great they were compared to "kids who were completely screwed up.") Mr. Miller was preceded in death by his sister, Rosalind Baldwin. He is survived by his loving wife of 61 years, Jeanne K. Miller; son, Chris Miller (Susan); daughter, Jennifer Miller Felbinger (Matthew); grandchildren, Bill (Amanda), Michael, Katie, Nate, and Max; and great grandchildren, Braden, Tyler and Amelia. He will be missed. Baker McCullough Funeral Home, Hodgson Memorial Chapel is assisting the family with a private funeral service. In lieu of flowers, remembrances may be made to the Yankee Air Museum, www.yankeeairmuseum.org.

Merrill Clark Miller, age 97, of Savannah passed away Wednesday, April 13, 2022. He died peacefully, listening to stories about his grandkids and surrounded by love. Mr. Miller was born on December 12, 1924 in Detroit, MI, the son of the late... View Obituary & Service Information

The family of Merrill Clark Miller created this Life Tributes page to make it easy to share your memories.

Send flowers to the Miller family.