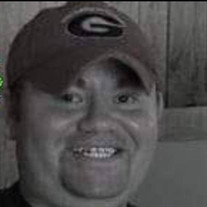 Matthew Garrett O’Neal passed away unexpectedly at his parents home on Sunday, January 9, 2022. He was born in Savannah, Georgia on December 27, 1984. He had just celebrated his 37th birthday. Matt had struggled with a lifetime of health issues. He suffered from kidney disease with end stage renal disease, being on dialysis and more recently, congestive heart failure. He was a 2003 graduate of Memorial Day School and also a graduate of Savannah Technical College. Being unable to work full time due to his health issues, Matt worked part time at Fort Pulaski National Monument and the Montgomery Division Fire Department. At one time, he worked full time briefly at Lowe’s. He was a member of Grace United Methodist Church. As an only child, he was the love of his parent’s lives, their whole world. He was his Dad's “best bud” and golden boy. He was his Mama’s everything. He was pure joy to be around. Despite his health issues, Matt got on with his life the best he could. He always said “Someone had to be Matt O’Neal and God picked him”. He was a shining light who taught many of life’s lessons to others. From him we learned dignity, grace, and most importantly, perseverance. We shall miss him every second of every day. He was a loyal fan of the Georgia Bulldogs, Atlanta Braves and the Fighting Irish, Notre Dame. He was an organ recipient, having gotten his first kidney transplant at the age of 12, which he kept for 17 years. Matt was preceded in death by his beloved sweet wife, Christina Winsett O’Neal; his maternal grandparents, Sarah and Sutton Durden; his paternal grandparents, Evelyn and Bob O’Neal; his grandfather in law, Don Hall; his paternal great grandparents, Grace and Hollis Garmon; his uncle, Dusty Durden; and his beloved loyal dog, Molly. He is survived by his parents, Reba and Greg O’Neal; uncle, Danny Durden; numerous cousins; mother and stepfather in law, Bonnie and Jim Ell; father and step mother in law, Steven and Patricia Winsett; brother in law, Steven Winsett; and great aunt and uncle, Betty and Leo Midkiff. His parents would like to give thanks to his many talented physicians, Dr. William A Darden, Jr., Dr. Christopher Walls, Dr. Dana Kumjian, Dr. Gary Elkin, the Staff of Abercorn Mercy Dialysis Center, and the staff of Savannah Vascular. A memorial service will be held Wednesday, January 19, 2022 at 3PM at Baker McCullough Funeral Home Hubert C. Baker Chapel. The family will receive friends one hour prior to the service. Baker McCullough Funeral Home Hubert C. Baker Chapel, 7415 Hodgson Memorial Drive Savannah, GA 31406 912-927-1999, has been entrusted with arrangements.

Matthew Garrett O&#8217;Neal passed away unexpectedly at his parents home on Sunday, January 9, 2022. He was born in Savannah, Georgia on December 27, 1984. He had just celebrated his 37th birthday. Matt had struggled with a lifetime of health... View Obituary & Service Information

The family of Matthew Garrett O'Neal created this Life Tributes page to make it easy to share your memories.

Matthew Garrett O’Neal passed away unexpectedly at his parents...

Send flowers to the O'Neal family.