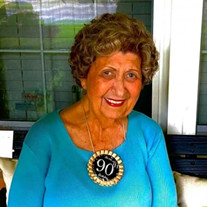 Mary Lou Johns Silas, 90, died May 22, 2021, at home. She was born in Lancaster, Pennsylvania, and raised in Columbia, Pennsylvania, but moved to Savannah in the late sixties after her husband retired from the Air Force. Mary Lou was the daughter of Samuel B. Johns and Edna Book Johns. Mary Lou met the love of her life, Edwin W. Silas, while they were both serving in the Air Force at Pope Air Force Base. They enjoyed 63 years of marriage before Ed’s death in 2014. Following her discharge from the Air Force, Mary Lou devoted herself to raising her three sons. She and Ed were actively involved in the Boy Scout organization, encouraging all three sons to achieve the rank of Eagle Scout. After moving to Savannah, Mary Lou was employed by BellSouth, retiring after 22 years of service. Mary Lou was a member of Southside Baptist Church where she enjoyed many lasting friendships developed through the WMU, her Sunday School class, and numerous church activities. One of Mary Lou’s greatest pleasures was her weekly canasta card game played with many of her dearest friends. Until the pandemic, these friends had met and encouraged each other for over 25 years! But of most importance to Mary Lou was her relationship with her Lord and Savior. Next to that was her love for her family. She especially loved watching the grands and the great-grands play! Mary Lou was predeceased by her parents, Samuel and Edna Johns; husband, Edwin W. Silas; son, David S. Silas; and sisters, Marie Palmer, Lillian Donnan, Mildred Thrasher, Gladys Heaps, and Roberta Nissley. She is survived by her sons, Steven W. Silas, Sr. (Janet) of Guyton, GA, and John M. Silas, Sr. (Diane) of Metter, GA; grandchildren, Heather Silas (Greg Hamilton), Jaren Curry, John M. Silas, Jr., Wes Silas (Alisha), Christopher Silas, and Samantha Bookter (Robert); and great-grandchildren, Bailee Silas, Grey Bookter, John E. Silas, Camryn Curry, Harrison Bookter, David Hamilton, Colton Silas, Elayna Hamilton, Bayne Silas, Colby Silas, Ava Bookter, Bryce Bookter, Owen Silas, and Olivia Bookter. The family would like to thank these special caregivers for their outstanding care of Mary Lou, enabling her to fulfill her wish of being able to live at home: Deborah Davis, Peggy Hilton, Sandy McGlohon, Ellen Rhames, and Erin Rhames. The family also appreciates the comfort and care provided by THA/Island Hospice. The funeral service will be held at 11:00 a.m., Thursday, May 27, 2021 at Baker McCullough Funeral Home, Hubert C. Baker Chapel, 7415 Hodgson Memorial Drive, Savannah, GA 31406. The family will be receiving friends from 10:00 a.m. until the time of the service. Burial will follow the funeral service at Forest Lawn Memory Gardens. In lieu of flowers, remembrances may be made to Southside Baptist Church, 5502 Skidaway Road, Savannah, GA 31406.

Mary Lou Johns Silas, 90, died May 22, 2021, at home. She was born in Lancaster, Pennsylvania, and raised in Columbia, Pennsylvania, but moved to Savannah in the late sixties after her husband retired from the Air Force. Mary Lou was the daughter... View Obituary & Service Information

The family of Mary Lou Johns Silas created this Life Tributes page to make it easy to share your memories.

Send flowers to the Silas family.