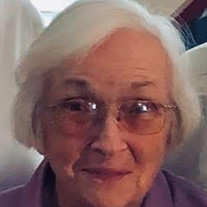 Martha Ann Clift Brooks, 96, of Savannah, died Thursday, January 21, 2021. Martha was born August 25, 1924 in Atlanta, Georgia to Thomas William Clift and Lessie Dieu Balch. Martha spent her childhood and early married years in Atlanta. Martha was preceded in death by her parents, her brother, Jack, and sister, Carolyn, and her beloved husband of 73 years, Charles Coleman Brooks, Sr. Martha and Charles were married on December 26, 1943. She always reminded us they were married when Uncle Sam said they could marry. They had “six of the best children any parent could have asked for”. That is a direct quote from Martha. The family moved to Savannah in 1964. Martha was a long-time member of Bull Street Baptist Church where she served as a Sunday School teacher for several years. Martha was active in the community by serving on the original board of directors for Safe Shelter, serving with Second Harvest Food Bank, and serving with Savannah Festival of Trees. An avid reader, Martha loved reading to many students at May Howard Elementary School. Martha is survived by her children, Charlie Brooks, Jr. (Elizabeth), Sally Lacey (Sammy), Allen Brooks (Joni), all of Atlanta, GA, Lucy Hazlip (Willie), of Savannah, GA, Frank Brooks, of Atlanta, GA, and Carolyn Speir (Larry) of Pooler, GA. She is also survived by 11 grandchildren and 14 great grandchildren. She will be greatly missed by all. The family is so very thankful for the wonderful care given to Mrs. Brooks by the staff at Savannah Square Senior Living Facility and Hospice Savannah. A private funeral service will be held Saturday, January 23, 2021. In lieu of flowers, please make all donations to Hospice Savannah, 1352 Eisenhower Drive, Savannah, GA 31406. Please sign our online guestbook at www.bakermccullough.com Services have been entrusted to Baker McCullough Funeral Home Garden City Chapel, 2794 West US Highway 80 Garden City, GA 31408. (912)964-2862. www.bakermccullough.com

The family of Martha Ann Brooks created this Life Tributes page to make it easy to share your memories.

Send flowers to the Brooks family.