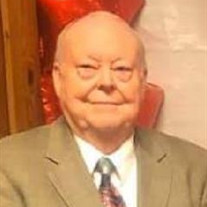 Mardre Powell Jones, Jr. (Butch or M.P.), went home to be with his Lord and Savior on December 23, 2021. He was born in Savannah, GA on December 10, 1941. He was predeceased by his parents, Mardre Powell Jones, Sr. and Maxine Johnston Jones; and brother, Thomas Marvin Jones. He is survived by his wife of 60 plus years, Gail Raley Jones; sons and daughters-in-love, Jeffrey W. Jones and Marcy, Stephen R. Jones and Paula; three granddaughters, Katie J. McCullough of Franklin, TN, Sarah E. Jones, and Ella G. Jones of Guyton, GA; and brother, Timothy A. Jones of Phoenix, AZ. M.P., as many people called him, worked several years for Atlantic Coastline R.R. He retired from the 117th GA Air National Guard and went to work for Savannah Electric & Power Co., which became GA Power Co. After a lateral transfer, he worked for Southern Co. Services for 19 years. He was a Past Worshipful Master of Thunderbolt Masonic Lodge #693. At his death, he was the Worshipful Master of Springfield Masonic Lodge #440. He had been secretary for many years before being elected Worshipful Master. Butch, as others knew him, loved his family and being with his Granddaughters was a special treat. He was a member of Calvary Baptist Temple. Funeral services will be held Tuesday, December 28, 2021 at Baker McCullough Funeral Home, Hubert C. Baker Chapel, 7415 Hodgson Memorial Drive, Savannah, GA at 11:00 a.m. with visitation from 10:00 – 11:00 a.m. The service will be conducted by Dr. Derward Poole. The graveside service will follow at Hillcrest Abbey Memorial Park. Pallbearers and honorary pallbearers will be members of The Pat West Sunday School Class. In lieu of flowers, please donate to the Lottie Moon Mission Fund at Calvary Baptist Temple.

The family of Mardre Powell Jones, Jr. created this Life Tributes page to make it easy to share your memories.