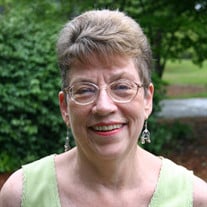 Lois Crook Crossley, 80, of Savannah, died peacefully on Saturday morning February 27, 2021. Lois was born in Atlanta, GA on June 30, 1940 to established architect, Lewis Edmund “Buck” Crook and Florence Hammers. The youngest of Buck's three daughters, she was his namesake: Lewis Edmund and Lois Elaine. After graduating from Atlanta’s Northside High School, she went on to study English at Emory University. She met James Logan Crossley Jr at Emory and after graduating, they married in 1962, spending the first three years of their marriage on a military base in Germany, where sons James Logan III and Aaron William were born. When James Jr’s tour ended, they returned to Atlanta and Lois gave birth to a daughter, Miriam Ruth, who only lived for a few weeks. They then moved to Columbia, SC where their third son Samuel Lewis was born, and shortly thereafter the family finally settled in Savannah, GA. For the next couple of decades, Lois raised three boys, sharing with them her humor, curiosity and love for music. She was genuinely funny and had an easy, infectious laugh. An accomplished artist and athlete, she encouraged and supported her sons in all forms of art, music and sports. In 1983, she commissioned a prominent architectural author and historian William Robert Mitchell, Jr. to write a book about her father. Lewis Edmund Crook, Jr.: "A Twentieth-Century Traditionalist In The Deep South" was published in November of 1984. The “Crook Book”, as it is affectionately known, is a lasting source of pride for all of Lois’s family. When the boys were old enough, Lois entered the workforce, selling real estate, teaching, and working retail, her longest tenure at Levy Jewelers. After years of learning about Savannah history, she became a successful tour guide. A long-time member of her church, White Bluff United Methodist, she volunteered in the office, enjoyed her Bible study group, and sang in the choir. She loved her seven grandchildren. She spent countless hours with them, solving puzzles and playing games of all sorts, even some she invented herself (“Bucket Ball” -- consisting of tennis balls and a bucket -- was a particular hit). She taught her sons to play chess when they were very young, as well as her eldest grandson Thomas, and she’d happily play them as adults, rarely winning, never minding. Throughout most of her adult life, Lois always kept two things: a garden and a cat. Often, it was many cats, and even the occasional dog. If the sun was out, she was probably working in the yard. And she planted something special -- a Crepe Myrtle or an Azalea -- for each grandchild, marveling with each at how big their plant had grown since their last visit. Lois loved cats! She shared a special relationship with Lucy, a playful calico who Lois treated like a sibling to her sons for almost 20 years. They loved each other in a very vocal way that only the two of them understood. When Lucy died, Lois became the caretaker for her neighborhood’s abandoned, stray and feral cats. She would feed them all, give love to those who would let her, spay and neuter those she could hold long enough to deliver to the vet, and made companions of a few who chose to stick around. Cats loved Lois! Lois was predeceased by her daughter, her husband, her parents and her eldest sister Florence. She is survived by her sister Mary Crook Moran, her sons and daughters-in-law Jim & Laurie, Aaron & Cherie and Sam & Sheila; and her grandchildren: Sarah Kate, Thomas Logan, Anna Grace, Henry Gerald, Noah Aaron, Charles Lewis, and Samantha Rae. A memorial service will be held at 2:00 p.m., Saturday, March 20, 2021 at Baker McCullough Funeral Home, Hubert C. Baker Chapel, 7415 Hodgson Memorial Drive, Savannah, GA 31406. The family will be receiving friends from 1:00 p.m. until the time of the service. In remembrance of her, please consider supporting either the Humane Society or your local chapter of the Alzheimer’s Association.

The family of Lois Crook Crossley created this Life Tributes page to make it easy to share your memories.

Send flowers to the Crossley family.