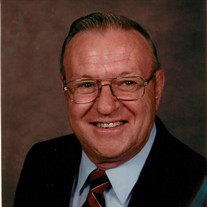 Livy Justice Nance, 89, of Clermont, Florida, passed away August 9, 2021. Mr. Nance was born January 8, 1932 in Bladenboro, North Carolina to the late Rufus Fleet Nance and Mary Hester Nance. He very proudly served in the United States Navy on the USS New Jersey in Korea. Following his military service, he briefly worked at Dixie Furniture before being employed as a yellow pages salesman at Bellsouth for over 30 years. A dedicated man of service, he volunteered his time with the Marine Rescue Squadron, where he achieved the rank of Commodore and Chaplin. He was also a member of the Telephone Company Pioneers, American Legion, and the VFW. He was a member of Windsor Forest Baptist Church where he served as a Deacon until his health declined. He was an outdoorsman who enjoyed fishing and hunting, was an avid NASCAR fan and Georgia Bulldogs fan. In addition to his parents, he is preceded in death by his siblings, Pearl Worley, Fleet Nance, Rachel Faust, Paul Nance, Kilby Nance, and Vada Davis. Surviving are his wife of 67 years, Billie Kate Barfield Nance; son, Michael Nance; daughter, Debbie Adams (Michael); sister, Lydia Lee; grandchildren, Justice Nance, Lisa Barnes, Alyssa Nance, Regan Arndt, Clay Arndt, and Lea Adams; and nine great grandchildren. The family will receive friends Friday August 13, 2021 from 5-7PM at Baker McCullough Funeral Home Hodgson Memorial Chapel 7415 Hodgson Memorial Drive Savannah, GA 31406. Funeral Services will be held Saturday August 14, 2021 at 11AM in the chapel of the funeral home officiated by Rev. Tim Brown with burial to follow at Forest Lawn Memory Gardens. In lieu of flowers, contributions may be made to the Alzheimer’s Association in Mr. Nance’s honor at act.alz.org/donate.

The family of Livy Justice Nance created this Life Tributes page to make it easy to share your memories.

Send flowers to the Nance family.