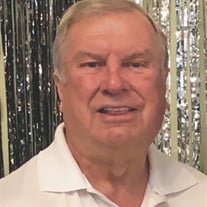 Lewie “Alvin” Hinely, age 71, of Savannah passed away Tuesday, April 6, 2021 at home. Mr. Hinely, a Savannah native was born on September 8, 1949, the son of the late Dorathel and Lewie A. Hinely, Sr. He was a 1969 graduate of Savannah High School. After graduating he served and was a veteran of the United States Army. Following his military tenure he began his formal education at Candler School of Radiology. After earning his degree he started his career with St. Joseph’s-Candler Hospital, retiring after 45 years of service as a Radiology Technologist. Outside of work Alvin enjoyed woodworking, building, but most of all, spending time with his family. Mr. Hinely is survived by his loving wife of 45 years, Diane; daughter, Elizabeth Childress (Brad); son, Thomas Hinely; sister, Dolores Boatright (Ronnie); grandson, Bradley Childress; and his beloved dog, Abby. The family will be receiving friends from 5:00 – 7:00 p.m., Friday, April 9, 2021 at Baker McCullough Funeral Home, Hubert C. Baker Chapel, 7415 Hodgson Memorial Drive, Savannah, GA 31406. Baker McCullough Funeral Home will be assisting the family with a private funeral service and burial at the Greenwich Section of Bonaventure Cemetery. In lieu of flowers, remembrances may be made to the Alzheimer’s Association at www.alz.org

The family of Lewie "Alvin" Hinely created this Life Tributes page to make it easy to share your memories.

Send flowers to the Hinely family.