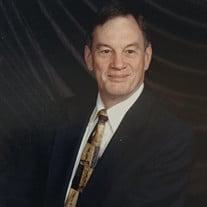 Kenneth Everett Robinson, 76, passed away at his home surrounded by family Saturday January 29, 2022. Mr. Robinson was born in Greenville, Mississippi May 23, 1945 to the late Ruby Winter Robinson and Everett “Rip” Robinson. Mr. Robinson was a veteran of the United States Navy, having served 24 years as a Hospital Corpsman and as a Pharmacist in the Medical Service Corps, achieving the rank of Commander. He graduated from Copiah-Lincoln Jr. College, attended the University of Mississippi (Ole Miss), and graduated from the Mercer University Southern School of Pharmacy. He worked for many years as a Pharmacist for St. Joseph’s Hospital until retiring in 2006. Mr. Robinson was awarded the rank of Eagle Scout in the Boy Scouts, a member of New Life Fellowship Church, MOAA, American Society of Hospital Pharmacists and Rho Chi Society. Kenneth loved baseball and enjoyed traveling with his son, Eric, to all 30 Major League Baseball stadiums. He also loved completing the Gulfstream 5K’s with his daughter Jane. But perhaps his greatest joy was his grandchildren. He was busy in retirement taking his grandchildren to ballgames, playgrounds, jumping on a trampoline, playing outside or visiting merry-go-rounds in the mall. He is survived by his wife of 51 years, Ann Gibson Robinson of Savannah, GA (formerly of Beaufort, SC); son, Eric Robinson (Kamela) of Chesapeake, VA; daughter, Jane Giebner (Josh) of Springfield, GA; brother, Steve Robinson (Angela) of Brandon, MS; grandsons, Kaeden and Bryce Robinson of Chesapeake, VA; and granddaughters, Cora and Anna Giebner of Springfield, GA. Funeral service will be held at Noon, Thursday February 3, 2022 at Beaufort National Cemetery 1601 Boundary Street Beaufort, SC with interment to follow. In lieu of flowers, the family prefer donations be made to Paradise Mountain Ministries, a home for missionary college-age kids, at http://www.paradisemtn.org/dontations.html Baker McCullough Funeral Home 7415 Hodgson Memorial Drive Savannah, GA 912-927-1999 has been entrusted with arrangements.

The family of Kenneth Everett Robinson created this Life Tributes page to make it easy to share your memories.

Kenneth Everett Robinson, 76, passed away at his home surrounded...

Send flowers to the Robinson family.