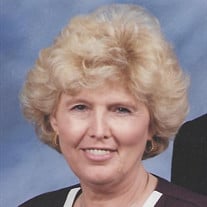 Karen Padgett Best, age 76, of Richmond Hill passed away Sunday, June 27, 2021 at home. Mrs. Best was born on February 19, 1945 in Savannah, the daughter of the late Lonnie and Elizabeth Burch Padgett. She was a 1963 graduate of Savannah High School and later earned her Radiology Technologist certification through Memorial Medical Center. She worked as a Radiology Tech with St. Joseph’s Hospital, retiring after 32 years of service. She was a longtime member of the Order of the Eastern Star where she was a Past Worthy Matron of Savannah Chapter #52, O.E.S., Past District Grand Deputy, Past Grand Representative to Utah, Past Grand Nurse, and was presently serving as Esther of Palestine Chapter #249, O.E.S. She was also a member of the International Order of Rainbow for Girls where she was a Past Grand Worthy Advisor of Georgia and served for 5 years as Mother Advisor of Savannah Assembly #1, I.O.R.G. She grew up attending Calvary Baptist Temple and was currently a member of Compassion Christian Church – East Campus. Mrs. Best was preceded in death by her husband of 45 years, Paul Dennis Best and daughter, Elizabeth Kay Lane. She is survived by her son, Paul Dennis “Bo” Best, Jr.; grandson, Brody Carson Lane; brother, David Padgett (Joan); beloved dog, Pepa; and several nieces and nephews. A funeral service with Order of Eastern Star service will be held at 1:00 p.m., Thursday, July 1, 2021 at Baker McCullough Funeral Home, Hubert C. Baker Chapel, 7415 Hodgson Memorial Drive, Savannah, GA 31406. The family will be receiving friends from 12:00 noon until the time of the service. Burial will follow the funeral service at Hillcrest Abbey Memorial Park. In lieu of flowers, remembrances may be made to the Humane Society for Greater Savannah, 7215 Sallie Mood Drive, Savannah, GA 31405.

Karen Padgett Best, age 76, of Richmond Hill passed away Sunday, June 27, 2021 at home. Mrs. Best was born on February 19, 1945 in Savannah, the daughter of the late Lonnie and Elizabeth Burch Padgett. She was a 1963 graduate of Savannah High... View Obituary & Service Information

The family of Karen Padgett Best created this Life Tributes page to make it easy to share your memories.

Send flowers to the Best family.