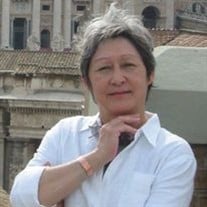 Julie Hernandez Blair, died April 27th, in her home after a long illness surrounded by family. A native of Savannah, Julie was born in 1942. She attended Cathedral Day School, Saint Vincent’s Academy, Armstrong State College and the University of Georgia. She married her great love and partner in life, Carlton W. Blair, Jr. and embarked on a life of adventure. Carl’s Air Force career took them to duty stations in the US and abroad including Washington DC, California, Texas, South Carolina and Naples, Italy. While she was a military wife, Carl was the husband of the CFO of AmeriBank, Controller for several restaurants including Fuddruckers’s in San Antonio Texas, Carolina’s in Charleston, South Carolina, and owner of Blair & Company which provided accounting services to the Pirates House and 45 South and others. Upon returning to Savannah, they reconnected with old friends and new and enjoyed bridge and frequent travel. She also researched and published a book on her family’s Chinese and Spanish family heritage so that future generations will know and cherish the uniqueness of their family. Julie was devoted to family. She was a loving and supportive mother, daughter, sister, aunt, and grandmother. She and Carl raised their kids to appreciate different cultures and family. Julie’s most joyous role was her role as “Grami” to her 6 grandchildren! Her absolute favorite thing to do was spend time with her grandchildren and she received great joy making each and every one feel cherished. Julie was a petite woman, but she filled a large space in the hearts of many. Wherever they were in the world, Julie and Carl kept deep connections with their Catholic faith. In Italy, they took the family on annual trips to Rome for midnight mass. Julie also served as a volunteer accountant for the Jesuit Refugee Service at the Jesuit Center in Vatican City. When their beloved daughter, Ashley, died it was their deep faith and love for each other and support of family and friends that carried them through. Julie had an unerring eye for detail which served her well in her accounting career and as a talented artist and author. Art was her forte and her paintings are sought after by friends and family. Most recently, her grandchildren started putting in requests. Her attention to detail showed in all that she did. She entertained with ease and enjoyed interior decorating. In fact, many of her friends sought her assistance. Julie is preceded in death by her husband of over 50 years, Carlton W. Blair, Jr., their beloved daughter Ashley J. Blair, her parents Perry J. and Josie Jung Hernandez, brothers Charlie Hernandez and Perry Hernandez Jr. and her sister Josephine H. Barnhill. She is survived by her daughter Angela B. Hutchinson (Mitchell) and their children Isabel, Andrew, and Luke of Atlanta, Georgia and son, Carlton (Tres) Blair III (Joni), and their children, Hamilton, Harrison and Jules Ashton of Charleston, South Carolina as well as numerous nieces, nephews, cousins and friends forever and longer. Funeral services with be Monday, May 3rd at St. Peter the Apostle Catholic Church with Visitation at 10:00 am followed by the Mass of Christian Burial at 11:00 am. Burial will follow in Bonaventure Cemetery. In lieu of flowers, remembrances can be made to Saint Jude’s Children’s Research Hospital, Jesuit Refugee Service and Saint Vincent’s Academy.

The family of Julie Hernandez Blair created this Life Tributes page to make it easy to share your memories.

Julie Hernandez Blair, died April 27th, in her home after a long...

Send flowers to the Blair family.