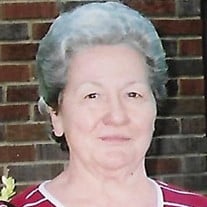 Julia Ann Hathcock Campbell, age 84, of Savannah passed away Sunday, September 19, 2021 at home. Mrs. Campbell was born on October 2, 1936 in Portal, GA (Bulloch County), the daughter of the late Reuben Theodore “RT” Hathcock and Iverna Ellis Hathcock. She was a 1954 graduate of Portal High School and moved to Savannah to attend Draughan’s Business College and later attended Armstrong State College. On September 3, 1955 she married Harold Lloyd Campbell (of Statesboro), son of Marion W. and Lois Jackson Campbell at Portal Baptist Church. The ceremony was officiated by Rev. CK Everitt. She was a longtime member of Taliaferro Baptist Church where she was active with the Sunday School Class. She was employed by the Girl Scouts at the Juliette Gordon Low birthplace from 1955 – 1969. She began her career there as a secretary and later served as Program Assistant until she left to join her husband in his dry cleaning business in 1969. On November 13, 1970 her husband was shot in an attempted robbery while leaving the plant at 33rd and Habersham. He died the following morning. Before his death, Harold Campbell and Frank Petway had formed a partnership that was comprised of four dry cleaning locations. It was dissolved in 1972 leaving Julia with two locations, Crystal Cleaners and Campbell’s One Hour Cleaners. In July of 1977 Crystal Cleaners burned down. Then, joined by her two sons, Dennis and Michael, she dedicated her life to making a success of the remaining location, which is Campbell’s Cleaners, Inc. on Waters Ave. She was always active in the dry cleaning industry and in 1979 was elected to the Board of Directors of SEFA (the South Eastern Fabricare Association), serving Georgia, Florida, Alabama, South Carolina and Tennessee. In 1983 she was elected as the FIRST woman to serve as President of SEFA. She was very interested in local history, but even more in her family’s genealogy. She researched her family’s genealogy by traveling through several states over several summers, usually accompanied by her niece, Kim Hathcock. Before the internet, she visited many small archives and tramped through many cemeteries to collect biographic information. She also loved to travel, making several trips to Scotland over the years. In addition to her own family, she had several godchildren in the Pferschy family. She also had a close friendship and longtime bond with Deedee Centilli who cared for her through all of her surgeries and illnesses and who stuck by her side until the very end. She is survived by her son, H. Dennis Campbell (Janis Zeringue Campbell); brothers, Vernon Hathcock (Edith) of Clyo, GA and Carroll Hathcock (Sybil) of Cottageville, GA; sister-in-law, Carolyn Cunningham Hathcock of Wolfeboro, NH; and brother-in-law, Desse O. Campbell. She was preceded in death by a son, Michael Lloyd Campbell (2004); two brothers, Milton T. Hathcock of Summerville, SC (2013) and James E. Hathcock of Wolfeboro, NH (1996); and sister, Rebecca Faye Hathcock Waters (1971). The family will be receiving friends from 4:00 – 6:00 p.m., Friday, September 24, 2021 at Baker McCullough Funeral Home, Hubert C. Baker Chapel, 7415 Hodgson Memorial Drive, Savannah, GA 31406. A funeral service will be held at 10:00 a.m., Saturday, September 25, 2021 at Baker McCullough Funeral Home, Hubert C. Baker Chapel with burial following at Forest Lawn Memory Gardens. In lieu of flowers, remembrances may be made to Hospice Savannah, P.O. Box 13190, Savannah, GA 31416.

The family of Julia Ann Hathcock Campbell created this Life Tributes page to make it easy to share your memories.

Send flowers to the Campbell family.