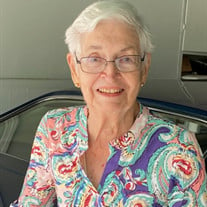 Joyce McKenzie Rimes Cole, age 87, of Savannah, GA passed away peacefully at Spanish Oaks Retreat and Hospice on Wednesday, April 28, 2021. Joyce was born on her mother’s birthday in her parent’s home in Savannah, GA on August 22, 1933. Her father worked construction and they moved to wherever he found work. After living in several locations including Reidsville and St. Simons Island they returned to Savannah. As a young girl she loved playing in the wooded area near her home that is now the shopping centers on Eisenhower Dr. between Abercorn and Waters Ave. Joyce was involved with the 4-H club and won shooting awards for her skills with rifles. On August 10, 1951 she married the love of her life, Leon A. Rimes III in a beautiful candlelight service in St. John’s Episcopal Church. L.A. was in the National Guard at the time, so after a short honeymoon she joined him in Murfreesboro, Tenn. Joyce worked at Sears during high school and again once they returned to Savannah. She and L.A. bought property on Rivers End Drive and began building a house in his spare time. Family members rushed to finish the home while Joyce was in the hospital with their first child. She was able to bring her daughter, Susan into their brand-new home, however Joyce had to walk a plank to get inside! From then on, Joyce was a stay-at-home mom raising her children and caring for all the neighbor children that played in her yard. They had many happy years in that house once it was completed. To this day, it is still a beautiful house and a gorgeous location. L.A. was transferred several times in his career and in 1969 the family moved to Dallas, TX, in 1974 to Exton, PA, and in 1978 back to Savannah. The house at Isle of Hope offered many fun times and wonderful relaxation by the pool. When Joyce’s children were young, the phrase “stay-at-home-mom” did not exist. It was usual for women to stay home with the children while their husbands worked. But even by the standards of the era, Joyce was an exceptional wife and mother. She cared deeply for her family and neighbors. And she always ensured that every child who crossed her threshold was safe, healthy, and happy. Joyce was a dedicated wife and mother and a devout Christian woman who raised her children in the church. She treasured her children and embraced every moment with them. She willingly chauffeured them to their various activities. She volunteered in schools and church when she could. She loved gardening, especially growing tomatoes. She also kept busy with sewing, making clothes for herself as well as costumes and clothing for her children. She knitted. Even made Barbie doll clothes, but her favorite pastime was crocheting. She made numerous tablecloths, doilies, and coasters. She could whip out a set of coasters from memory in an evening watching TV. So, it was a great disappointment in her later years when poor vision and stiff fingers prevented her from doing what she loved. Technology changed over the years, but Joyce kept up with things. She learned and enjoyed using her computer, especially to make greeting cards for her friends and family. Joyce was a very dedicated caregiver for both mothers who lived with her in their later years. At times it was very challenging, but she loved them and willingly put her whole heart into their care and wellbeing. In 1984 her world was shattered when L.A. died very suddenly on Friday the 13th in April. It was the worst heartbreak she experienced since the car wreck that took the life of her 11-week-old daughter, Susan. Several years after the sudden death of L.A. Joyce was able to find love again and married Dr. Guy S. Cole. She worked in his office and they had many years together enjoying boating in the beautiful waters around Savannah. Joyce was fortunate to have two wonderful men who loved her dearly for many years. Joyce was a longtime member of the Alee Shrine Temple Ladies Auxiliary. Another unwanted surprise was to find out that she had breast cancer. After having surgery to remove it she continued to be cancer free for many years. The Rimes family would like to offer a special thank you to Bob and Bebe Cole for their love and support over the years, Cathy Cole and Linda Newberry for being caring step-daughters, and the staff and administrators at Spanish Oaks Retreat and Hospice; especially Beverly, Joyce, and Stephanie for making her comfortable in her final months. Joyce is survived by her children, Kenneth V. and Deanne of Savannah, GA, Alan J. and Nancy of Durham, NC, Cynthia J. and Way Fountain of Columbia, SC, and Constance E. and Lance Smith of Acworth, GA; stepchildren, Cathy Cole of Aiken, SC, Robert Cole and Bebe of Savannah, GA, and Linda Newberry and Keith of Corinth, MS; grandchildren, Christopher, Stacy, A.J., Stewart, McKenzie, Brooke, and Avery; step grandchildren, Robert, Courtney, Phillip, and Laura; sister, Rita L. Gietzen; and 12 great-grandchildren as well as many nieces and nephews. She was preceded in death by her parents, Roberta E. McKenzie and William J. McKenzie; brother, William J. McKenzie, Jr.; infant daughter, Susan Arlene Rimes; and husbands, Leon A. Rimes, III (33 years) and Guy S. Cole (23 years). A funeral service will be held at 2:30 p.m., Friday, April 30, 2021 at Baker McCullough Funeral Home, Hodgson Memorial Chapel. The family will be receiving friends from 1:30 p.m. until the time of the service. Burial next to her beloved husband Leon and daughter will follow the funeral service at Hillcrest Abbey Memorial Park. In lieu of flowers, remembrances may be made to the Wesley Monumental United Methodist Church, Music Endowment Fund, 429 Abercorn Street, Savannah, GA 31401.

Joyce McKenzie Rimes Cole, age 87, of Savannah, GA passed away peacefully at Spanish Oaks Retreat and Hospice on Wednesday, April 28, 2021. Joyce was born on her mother&#8217;s birthday in her parent&#8217;s home in Savannah, GA on August... View Obituary & Service Information

The family of Joyce McKenzie Rimes Cole created this Life Tributes page to make it easy to share your memories.

Send flowers to the Cole family.