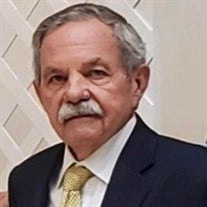 After living with Alzheimer’s for several years, Joseph Aloysius Hernandez, Jr., age 76, of Savannah and Richmond Hill, GA died on May 1, 2022. The cherished “only” son of the late Joseph (Cephus) A. Hernandez, Sr. and Eunice Lee Hernandez, Al was born in Savannah, GA on April 18, 1946.  He adored and cared for his parents, most recently his mother, who also suffered from Alzheimer’s.  Even though Al was an only child, his extended and loving Hernandez and Lee families were an important part of his life.  He was the consummate family man whose family knew that he would always be there for them.  He was kind, gentle, generous, and totally selfless.  He was resolute in living each day with his family in spite of the lingering, mind altering disease of Alzheimer’s. Al met his incredible wife, Marilyn in 1972.  They were the love of each other’s lives and will forever be soul mates.  Anyone who knew Al will attest to his devotion, loyalty, and everlasting love for Marilyn.  He was devoted to their children, Staci and Jim Glazier and Joseph Hernandez, as well as their grandchildren, Hannah and Harry Glazier. Al was a proud ’65 graduate of Benedictine Military School. Oh, the BC stories he could share!  His children and grandchildren continued the BC tradition.  Staci and Hannah cheered for BC.  Joseph is a ’06 graduate of BC, and Harry is a proud BC cadet.  Al never missed an event or game that involved his children or grandchildren. He was a proud Papa. Al was a man with many friends. He treasured his friends, and they treasured him.  Michael J. McDonough, Jr. was his best friend and brother of the heart.  Michael died many years ago but was certainly waiting at heaven’s gate with a big hug for his best friend.  Al’s family and friends will always remember his love for fishing and boating or just being on the water or tinkering in the garage.  He was a brilliant self-starter selling cranes for RS Armstrong in Savannah, followed by M.D. Moody & Sons, Inc. and MoBro Marine of Jacksonville, FL.  Al was also known for putting together his own deals from Bar Harbor to the Bahamas. He always worked tirelessly to provide for his family and his love for the water even influenced his profession. Some of his greatest friends were also customers.  Many thanks to all his closest family and friends for helping Al and Marilyn navigate these last few years.   Visitation will be held at St. James Catholic Church Thursday May 5, 2022, from 5:00p–6:30p with Rosary from 6:30p-7:00p. Funeral will be held Friday May 6, 2022, at St. James Catholic Church at 1p with burial service to follow at Forest Lawn.

The family of Joseph "Al" Aloysius Hernandez, Jr created this Life Tributes page to make it easy to share your memories.

After living with Alzheimer’s for several years, Joseph Aloysius...

Send flowers to the Hernandez family.