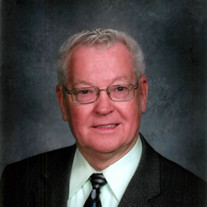 John Norman Howard III departed this earthly realm Friday, November 26, 2021 while holding the hand of his daughter and granddaughter. He was born on May 29, 1938 as the eldest son of John Howard Jr. and Laurie Howard, both of whom preceded him in death. His father passed away early in his life and John C. Smith would become his beloved step father. John was a veteran, having served his country in the USMC from '56-'59. On September 19, 1960, he married his best friend and life partner Sarah Ann Zittrauer. Their marriage began what would become a life of "Service Above Self". They shared over 51 years of wedded bliss before Sarah's passing 9 years and 11 months ago. During their marriage, they were blessed with a son, Johnny (1961) and a daughter, Ellen (1963). John graduated from Armstrong State College in 1969 as a member of the first class to graduate with a degree in chemistry. By that time he had already begun his career at Natrochem Inc. A career that would see him retire after 44 years as CEO of the company. John spent immeasurable hours of service to the Rotary Club of Savannah West, as well as bowling associations throughout the southeast. His service to Rotary included a term as President, as well as multiple years serving as Secretary/Treasurer. His service to the bowling community reached across the Southeast Bowling Assn., the Georgia Bowling Assn. and the Savannah Bowling Assn. He served in multiple capacities over the years. In recognition of his years of dedication, John has been inducted into the Halls of Fame of each of those organizations. His proudest moments in life revolved around his family. Family members include his son Johnny (Dakotah), his daughter Ellen, his daughter in law Lori, his sisters Nona Ferragamo (Tony) and Martha Yawn (Roy). His brothers Alvis (Nancy), Larry (deceased), and Jerry (deceased). His grandchildren Wesley Howard (Jane), Kayla Howard and Corbin Howard and his great granddaughter Piper. Numerous nephews and nieces, cousins and in-laws. Family will be receiving friends Wednesday, December 1, 2021 from 5:00 p.m. to 7:00 p.m.. A funeral service will be held at 1:00 p.m., Thursday, December 2, 2021 at Baker McCullough Funeral Home, Hubert C. Baker Chapel. The family will be receiving friends from 12:00 p.m. until the time of the service. The service will be live streamed and can be viewed by using the link that will be posted here the morning of the service. A burial will take place at Forest Lawn Memory Gardens directly after the service. In lieu of flowers, the family requests that you honor Johns memory by supporting either of these two organizations that he cared passionately about: For Rotary - The Wesley Community Center; 1601 Drayton Street, Savannah, GA 31401 . For Bowling - Bowling to Veterans Link (BVL) - 11350 Random Hills Road, Suite 800, Fairfax, VA 22030 (BVL.ORG).

John Norman Howard III departed this earthly realm Friday, November 26, 2021 while holding the hand of his daughter and granddaughter. He was born on May 29, 1938 as the eldest son of John Howard Jr. and Laurie Howard, both of whom preceded... View Obituary & Service Information

The family of John Norman Howard, III created this Life Tributes page to make it easy to share your memories.

Send flowers to the Howard family.