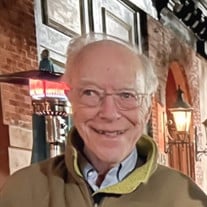 John Joseph Galvani, Jr., age 85, passed away Thursday, June 16, 2022, in Hospice care in Savannah, GA. John was born in Framingham, MA, to Helen Bransfield Galvani and John J. Galvani in 1937. He graduated from Boston College High School in 1955 and entered the Society of Jesus. He obtained his BA, MA Philosophy, and BDivinity degrees from Boston College. While a Jesuit, John spent three years in Baghdad, from 1962-1965, where he taught at Baghdad College and the Jesuit College. He then studied comparative religions at Harvard University. He remained a member of the Society of Jesus for twenty years. John became a teacher of foreign languages. He was expert in Latin, Arabic, and Spanish, among others. He taught in the foreign language department at Duxbury, MA, High School and thereafter at the University of Massachusetts in Boston. After retirement, he and his wife Margaret "Marge" Inness moved to Georgia. They were active in numerous Audubon societies and he served for several years as president of the Coastal Georgia Audubon Society. He is preceded in death by his loving wife Marge, who passed away last August. John is survived by his brothers Paul (Sheila), Peter, four nieces and nephews, and six great nephews and nieces.. A funeral mass will be held at 11:00 a.m. Tuesday, June 21, 2022 at Saint Frances Cabrini Catholic Church, 11500 Middleground Rd, Savannah, GA 31419. A burial will take place 11:00 a.m. Wednesday, June 22, 2022 at Greenwich Cemetery, 330 Greenwich Rd, Savannah, GA 31404. In lieu of flowers, please consider donating to the Coastal Georgia Audubon Society, Hospice of Savannah, or a charity of your choice. https://www.coastalgeorgiaaudubon.org/product/donation/3 https://www.hospicesavannah.org/Give/

The family of John Joseph Galvani, Jr. created this Life Tributes page to make it easy to share your memories.

Send flowers to the Galvani family.