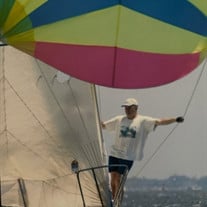 John W. Ewing, beloved cousin, friend, and co-worker, passed away on December 8, 2020, at the age of 49. John was born in Columbia, MO, on December 9, 1970, to Sharon Kay Tabor, and after his mother’s death, was raised by his grandmother, Lodema Tabor in Lebanon, MO. After attending the University of Missouri, he entered the Naval Nuclear Propulsion Program and, upon completion, he began his submarine service near Seattle, WA. John loved the Pacific Northwest, and hoped to return there to live someday. A proud member of the "silent service", he achieved the rank of Chief Petty Officer, and a highlight of his service was passing through the Panama Canal. The Navy transferred him to Charleston, SC, where he loved to sail, both competitively and for pleasure. He eventually landed in Savannah, and had enrolled in flight lessons to pursue his passion for flying. In addition to his new passion for flying, John was a life-long Mizzou sports fan and never missed a game. John received a Bachelor of Science in Applied Science and Technology from Thomas Edison State University in December 2013. John most recently worked as an electrician for GAF. He was a member of City Church. John is preceded in death by his mother, Sharon, and his grandmother. He is survived by his cousin Scott Tabor of Rochester, MN, family, friends and colleagues from GAF and City Church. John will be interred at the National Cemetery in Beaufort, SC. In lieu of flowers, the family requests that donations be made to the Charleston Animal Society, 2455 Remount Road, N. Charleston, SC, 29406 or Charleston Community Sailing, P.O. Box 21811, Charleston, SC 29413.

The family of John W. Ewing created this Life Tributes page to make it easy to share your memories.

Send flowers to the Ewing family.