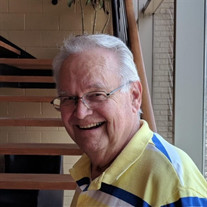 John Deering Roberts, 78, of Highlands, NC, and formerly of Savannah died peacefully in his wife’s loving arms on January 21, 2021 of complications due to COVID. He was born to Arline H. Roberts and Arthur F. Roberts, on June 30, 1942 in Atlanta, GA. He was a graduate and proud alumnus of Sewanee Military Academy, past president of The Exchange Club of Savannah, a member of the Sons of the Confederacy, and Lay Eucharistic Minister at Christ Church Savannah. He was an active member of the Episcopal Church of the Incarnation, and loved time spent at The Summer Chapel. John is survived by his wife of 42 years, Barbara C. Roberts. They were married on August 11, 1979 in Savannah, GA. Together they raised four children: John D. Roberts, Jr. (Janice), Nancy C. Keck (Matt) of Savannah; Marion Smith, III (Caroline) of San Francisco, CA, and Rawson S. Gulick (Charlie) of Sausalito, CA. His brother James H. Roberts (Donna) of Bainbridge Island, WA; grandsons John D. Roberts, III (Heidi), J. Hart Roberts, and R. Mayes Keck; granddaughter Margaret O. Smith, and great granddaughter Ivory D. Roberts also survive him. He is preceded in death by his parents, and grandson, Jake Allen Roberts. A graveside funeral service will be held at 11:00 a.m., Tuesday, June 15, 2021 at Greenwich Cemetery with The Rev. Dr. Marc Robertson officiating. The family will be receiving friends at the graveside from 10:30 a.m. until the time of the service. In lieu of flowers, the family requests memorials be made to the Cashiers Highlands Humane Society, PO Box 638, Cashiers, NC 28717 or the charity of your choice.

John Deering Roberts, 78, of Highlands, NC, and formerly of Savannah died peacefully in his wife&#8217;s loving arms on January 21, 2021 of complications due to COVID. He was born to Arline H. Roberts and Arthur F. Roberts, on June 30, 1942... View Obituary & Service Information

The family of John Deering Roberts created this Life Tributes page to make it easy to share your memories.

John Deering Roberts, 78, of Highlands, NC, and formerly of Savannah...

Send flowers to the Roberts family.