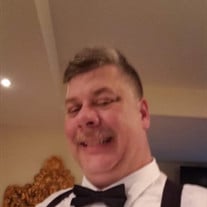 Jesse Steven Carl Hubbert, III, age 45, of Richmond Hill passed away Tuesday, September 7, 2021 at the VA Medical Center in Charleston, SC. Mr. Hubbert was born on September 19, 1975 in Savannah, the son of the late Maryanne G. and Jesse C. Hubbert, II. He was a graduate of Windsor Forest High School and continued his formal education at Armstrong State College where he pursued a degree in psychology. He was a veteran of the United States Army, serving two tours in Iraq and continued service with the Department of Defense. He was the owner and founder of Another Adventure Daycare where he was known as “Mr. Jesse”. He was a member of Zerubbabel Lodge #15, F.&A.M., the Scottish Rite Consistory – Valley of Savannah, and Alee Shrine where he was active with the Drifters. He enjoyed traveling, spending time on his farm, serving with the Shrine, and cooking barbecue, both competitively or simply hosting friends, but above all, he loved being with his family. In addition to his parents, Mr. Hubbert was preceded in death by his brother, William Craig Hubbert. He is survived by his loving wife of 16 years, Evie Hubbert; son, Jesse “Jacob” Hubbert; daughter, Elizabeth Hubbert; sister, Debra M. Brown (Kevin); mother-in-law, Ina Binder; and a host of extended family and dear friends. A Celebration of Life will be held at 7:00 p.m., Friday, September 17, 2021 at Baker McCullough Funeral Home, Hubert C. Baker Chapel, 7415 Hodgson Memorial Drive, Savannah, GA 31406. The family will be receiving friends from 6:00 p.m. until the time of the service. Flowers are accepted or remembrances may be made to the Shriners Hospitals for Children.

The family of Jesse Steven Carl Hubbert, III created this Life Tributes page to make it easy to share your memories.