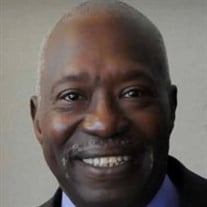 Jerry Pernell Copeland, 70, met his heavenly father on July 12, 2021, with his family at his side. Jerry was born on June 5, 1951, to the late Eloise Copeland in Savannah, Georgia. He attended Hodge Elementary School, DeRenne Middle School, and graduated from Alfred E. Beach High School (Class of 1970). An avid sports fan, he played recreational softball in Cann Park. Jerry enlisted in the United States Air Force in 1971. A veteran of Vietnam and Operation Desert Storm, he retired in 1991 after 20 years of service. While serving in the military, he was an imagery production technician for 11 years, beginning his lifelong passion for photography and collecting Air Force memorabilia. During his station in Minot, North Dakota, he cross-trained as an aircraft maintenance technician. He was well-traveled throughout his career and his other assignments included Tampa, FL; Myrtle Beach, SC; South Korea; The Philippines; Thailand; and Japan. Jerry was a member of VFW Post 660. Following his honorable discharge from the Air Force, he worked in various positions, most recently as a courier for a compounding pharmacy delivering nuclear medicine to area hospitals. He was a devoted father and provided immense support to his daughters regarding their academic and extracurricular endeavors, aspirations, and relocations. He enjoyed cooking Southern cuisine; listening to Motown artists and reggae music; learning about Black American history through books and documentaries; watching Westerns (his self-selected middle name was an homage to the actor who played Adam Cartwright in Bonanza); playing golf; and spending time sharing stories and reminiscing with his family and military buddies. He also funded the education of numerous students in the State of Georgia through direct contributions to the Helping Outstanding Pupils Educationally (HOPE) Scholarship Program. Jerry is survived by his loving wife of 43 years, Un Nam; three daughters: Tanya of New York City; Monica (Raymond Givens, MD, PhD) of Atlanta, GA; and Elizabeth of New York City; two grandsons, Lucas and Nicholas; and a granddog, Michael. His four surviving siblings include Larry N. Copeland (Pearlie) of Savannah, GA; John P. Copeland, Sr. (Beverly) of Savannah, GA; Denise Redd (Dennis) of Atlanta, GA; and Janice Howard of Savannah, GA. Jerry will also be forever remembered by his numerous cousins, nieces, nephews, extended family, and dear friends. A patriotic, hardworking American who loved his country, he leaves behind a legacy of honorable service to the United States. On behalf of the family, all services are private.

Jerry Pernell Copeland, 70, met his heavenly father on July 12, 2021, with his family at his side. Jerry was born on June 5, 1951, to the late Eloise Copeland in Savannah, Georgia. He attended Hodge Elementary School, DeRenne Middle School,... View Obituary & Service Information

The family of Jerry P. Copeland created this Life Tributes page to make it easy to share your memories.

Send flowers to the Copeland family.