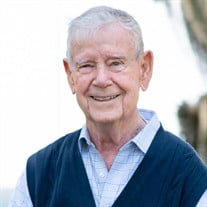 MSgt Jerome (Jerry) Carl Egan USAF Ret., 86, of Savannah, GA, passed away April 21, 2021. MSgt Egan was born October 22, 1934 in Binghamton, New York to the late Winnifred Moss Egan and James H. Egan. He enlisted in the United States Air Force in high school and honorably served for over 21 years, achieving the rank of Master Sergeant. He served in combat during the Vietnam War, before his retirement in 1973. In addition to his parents, MSgt Egan is preceded in death by his wife, Angela Egan. As a youth of 6 years old he was challenged with the early death of his father and his mother’s illness. As a result, he and his five siblings were separated. Subsequently, he was raised in several foster homes and Saint Mary’s Boys home in Binghamton, NY. Despite the incredible hardships and obstacles he faced growing up, he persevered and found direction grounded in both faith and humility. In 1974, he moved with his family to Savannah, GA. He was of the Catholic faith and an avid participant. After serving for over 38 years in the Cathedral Basilica of Saint John the Baptist men’s choir, he transferred as a communicant to St. Francis Cabrini Catholic Church for 21 years where he worshiped and served faithfully. In November 2011, Jerry and late Wife Angela were honored with the Prestigious Bishop Garland Award from the Catholic Diocese of Savannah. MSgt Egan was also a member of the Knights of Columbus #5588 and the Elks Lodge. He was a member of the Irish Heritage Society and a Former member of the Savannah Saint Patrick's Day Parade Committee. Surviving are sons, Michael Egan (Danise) of California, Mark Egan (Kaye) of Savannah, James Egan (Celena) of Savannah, and Keith Egan (Mary) of Statesboro; brothers, Joseph Egan, James Egan, and Butch Bealls; sisters, June O’Keefe, Barbara Cohen, and Janice Bealls; and ten grandchildren. MSgt Egan was a devoted family man and centered his life around three important words “Faith, Family & Friends. He lived life honoring those words. This was the cornerstone of his belief and ultimately his Legacy. He will be deeply missed by all. Visitation will be held Thursday April 29, 2021 from 5-7pm with a 6pm Rosary service with Father Gabe Cummings officiating at Baker McCullough Funeral Home Hubert C. Baker Chapel 7415 Hodgson Memorial Drive Savannah, GA 31406. Funeral Mass will be held on Friday April 30, 2021 at 11am at St. Frances Cabrini Catholic Church with Father Joe Smith officiating. Facial coverings are required. Burial will follow at the Catholic Cemetery on Wheaton Street. In lieu of flowers, contributions may be made to St. Frances Cabrini Catholic Church 11500 Middleground Road Savannah, GA 31419

The family of MSgt. Jerome (Jerry) Carl Egan USAF Ret. created this Life Tributes page to make it easy to share your memories.

Send flowers to the Egan family.