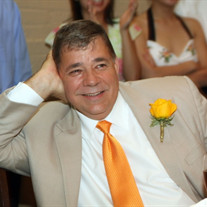 Jacob Aulmon Giles passed away on April 25th at 12:25 am. He is preceded in death by his parents, Jacob Aulmon and Lois Hamm Giles; his brother, Charles Giles. Jacob Aulmon Giles was born on January 29, 1953 in Augusta, Georgia. He spent most of his life in Savannah, Georgia. He was the first-born of five children. He graduated from Jenkins High School in 1971, where he lettered in football. He went on to study criminal justice at Armstrong State College, and graduated in 1975. He pursued a lifelong career in law enforcement with the Savannah Police Department. In 2001, he became the President of the local Fraternal Order of Police, and served in that position until his death. He was a member of the Police Emerald Society. In 1977, he met the love of his life, Judy Lee, while attending courses at Armstrong State College. They were married on April 8, 1979 at Morningside Baptist Church. They went on to have a beautiful family. They raised their daughters, LeAnne and Rebecca, in Savannah. He was a devoted husband, father and granddaddy and loved his family wholeheartedly. Aulmon loved going to garage sales and was an avid reader and book collector. To him, there was nothing better than telling stories to a captive audience and was often known to be animated with them. He dedicated himself to his career, taking care of others, and trying to make a positive difference in his community. He is survived by his wife of 43 years, Judy Lee Giles; his daughters LeAnne Kelly (Michael) and Rebecca Giles; his brothers, John Giles (Anne) and Frank Giles; his sister, Martha Reardon; two sisters in law, Geri Powell (Geoffrey) and Jeannette Petrea (Sonny); three beautiful grandchildren, Katherine Lee Kelly, Jacob David Kelly, and Lauren Blythe Kelly; many cousins and nephews. Funeral services will be held at Baker McCullough Funeral Home, Hodgson Memorial Chapel on Friday, April 29th at 11 am proceeded by a short graveside service at Bonaventure Cemetery. Visitation is at 10 am on Friday. In lieu of flowers, donations can be made to the FOP and sent to Frank W Mobley Lodge #7, 108 Chevis Road, Savannah, Georgia 31419.

Jacob Aulmon Giles passed away on April 25th at 12:25 am. He is preceded in death by his parents, Jacob Aulmon and Lois Hamm Giles; his brother, Charles Giles. Jacob Aulmon Giles was born on January 29, 1953 in Augusta, Georgia. He spent... View Obituary & Service Information

The family of Jacob Aulmon Giles created this Life Tributes page to make it easy to share your memories.

Send flowers to the Giles family.