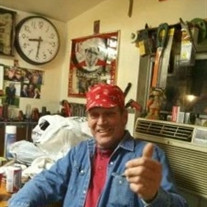 Jack L. Ward, 70, of Guyton passed away Sunday, March 21, 2021 at his home surrounded by his family and under the care of Amedisys Hospice. A native of Savannah, Georgia, he was the son of the late Jack Dempsey Ward and Louise Carnes Whalley.... View Obituary & Service Information

The family of Jack Learon Ward created this Life Tributes page to make it easy to share your memories.

Send flowers to the Ward family.