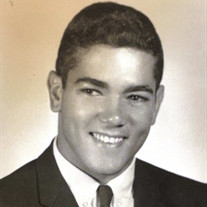 Henry Wetherhorn Lehwald, Jr. has passed away. He was born January 16, 1943 in Savannah, GA. He is the son of the late Henry Lehwald, Sr. and Gertrude Lehwald of Savannah, GA and sister, Delores Kaminsky of Savannah, GA. He is survived by his devoted, loving wife of 54 years, Marie Lehwald of Coral Springs, FL; his beautiful two daughters, Niccole Lehwald White (Phil) of Stuart, FL and Jennifer Lehwald Parker (Sam) of Boone, NC and his wonderful grandchildren, Zackery, Morgan, and Madeline White as well as Ramsey Marie and Georgia Parker; his nieces and nephew, Ivy Silbiger and family, Gay Udinsky and family, and Britt Kaminsky and family are loved dearly. Henry (Hank) was a graduate of Benedictine Military School, class of 1961 where he excelled in a variety of sports and was inducted into the Benedictine Wall of Fame. He received many awards and achievements including first team All State and All American Honors to mention just a few. He also received multiple football offers but ultimately signed with the L.A. Dodgers. After his baseball career, he attended Georgia Military College for 2 years and then on to Georgia Southern University where he was captain of their inaugural golf team. He was drafted in the US Army and chose to go to Officer Candidate School where he became an officer. He was honorably discharged as First Lieutenant. Life landed him in Atlanta where he was an assistant golf pro at East Lake Country Club. It was while in Atlanta he found his second passion and began his career in investment banking. He opened his own investment firm in Boca Raton, FL and after retiring early, he spent time doing what he loved. He enjoyed entertaining, traveling, golfing, snow skiing and the beach with his family. In 2016, he was honored to be inducted to the Greater Savannah Athletic Hall of Fame. He was a natural leader in all aspects of life and accepted that role with the utmost respect. He was a loyal friend, very generous and giving, and a remarkable mentor to many people throughout his lifetime. But above all, he was a devoted and loving husband, father and Papa. He is leaving a long legacy of precious memories for us to cherish. The family will be receiving friends from 12:30 – 1:30 p.m., Wednesday, March 9, 2022 at Baker McCullough Funeral Home, Hubert C. Baker Chapel, 7415 Hodgson Memorial Drive, Savannah, GA 31406 followed by a graveside service at Bonaventure Cemetery. Remembrances may be made in the name of Henry Lehwald, Jr. to Benedictine Military School, 6502 Seawright Drive, Savannah, GA 31406 or to the American Heart Association, PO Box 840692, Dallas, TX 75284-0692.

The family of Henry Wetherhorn Lehwald, Jr. created this Life Tributes page to make it easy to share your memories.

Henry Wetherhorn Lehwald, Jr. has passed away. He was born January...